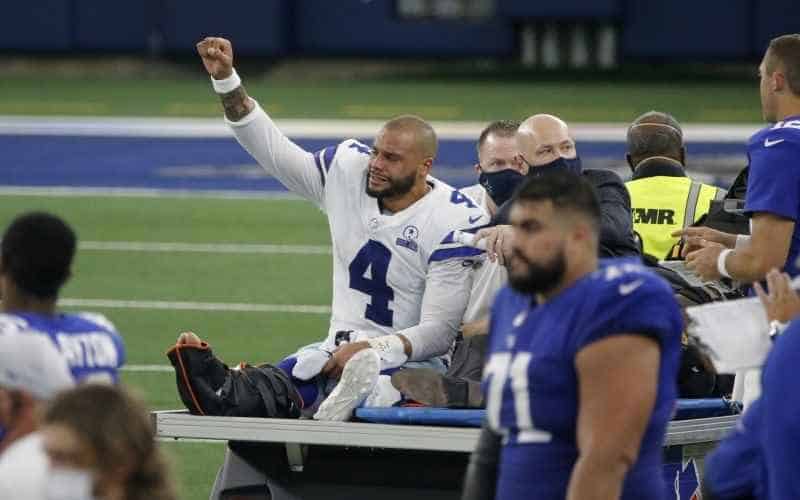 Just when you thought the “NFC Least” couldn’t get any uglier.

While scrambling toward the sidelines against the New York Giants yesterday, Dallas Cowboys quarterback Dak Prescott suffered a compound fracture and dislocation of his right ankle.

At first, Prescott clutched at his calf muscle as if he were suffering from a cramp, but when the game returned from commercial break, it was clear that the injury was much more severe.

Prescott could not contain his emotions while being carted off of the field, as tears streaked down his face amidst cheers of support from the home crowd at AT&T Stadium. Surgery on Prescott’s ankle was completed last night, and his Twitter account has confirmed that he is now at home and recovering.

Prior to the beginning of week 5, Dallas was favored in the NFL playoff betting odds to become the 2020 champion of the NFC Least with -105 odds.

As of today, Bovada, a top-rated NFL sportsbook, has increased Dallas’ odds to -120.

No timetable has been given for Prescott’s return, and broken bones typically take anywhere from four to six weeks to mend, so there is a chance that he could suit up again in 2020.

In the meantime, longtime starter for the Cincinnati Bengals, Andy Dalton, will be taking snaps under center for the Cowboys, and the team is feeling a lot better about their potential after he was able to secure a narrow 37-34 victory over the pathetic Giants yesterday afternoon.

Dalton provides a high production floor for a backup and has already proven his worth in just over fifteen minutes of in-game action.

Another component of the increase in the Cowboys’ NFL odds is that the remaining teams in the division are circling the drain. If any of these NFC East teams were playing in a division that included high-end franchises, they’d already be thinking about next year and ready to throw in the towel on the 2020 season.

That’s not the case, however, and even the Giants, who are winless after five weeks, are only 2 games out of first place.

The division is up for grabs, and NFC East teams are gearing up to win now instead of tanking for a high draft pick next year. That’s exactly why the Washington Football Team benched QB Dwayne Haskins in favor of Kyle Allen who is in his first year with the team after showing some flashes of brilliance last year in relief of an injured Cam Newton in Carolina.

Allen was injured in the first half, making way for Alex Smith to complete his path to competitive football once again after recovering from an injury that has kept him out of the game since late in the 2018 season.

It’ll be a free for all for a ticket to the 2020 playoffs that should provide some entertainment for the next few weeks, which is a much more preferable scenario to one team running away with the division.

It should be noted that the Cowboys’ odds to win Super Bowl 55 have risen from +3300 to +2800, but they now find themselves as the fourteenth most likely option, two places lower than last week.

It has been a whirlwind 24 hours for Dallas and their fans, but with a little luck, they may emerge from this entire scenario with a 2020 season they can be proud of.