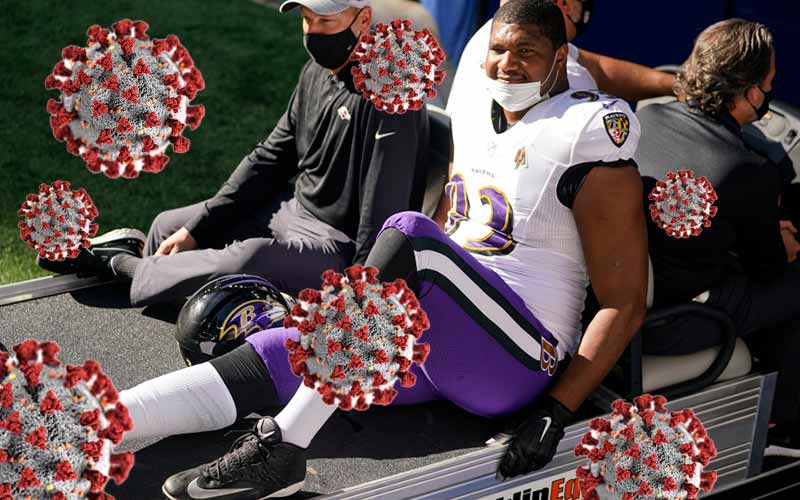 The NFL’s COVID-19 policy has held the league together through the first twelve weeks of the 2020-2021 season, but the latest wave of infections in the United States has caused for some questionable decisions from Commissioner Roger Goodell and the front office.

Tonight’s matchup between the Pittsburgh Steelers and the Baltimore Ravens was supposed to be the prime time Thanksgiving NFL game, showcasing what is inarguably the league’s greatest rivalry over the past two decades.

Now, the game is set to occur this evening, a full six days after its originally scheduled air date, and just one day before week 13 begins with Thursday Night Football.

As more COVID-19 cases have been reported on the Ravens’ roster, the NFL betting odds between the two teams have separated. The opening point spread favored the Steelers by 3.5, but over the course of several days of postponement, that spread has ballooned to 10.5.

From the outside looking in, it appears that the NFL front office has placed an emphasis on this marquee matchup between AFC North juggernauts, as it seems that no amount of positive tests can remove this game from the schedule.

Once it was revealed that Baltimore QB Lamar Jackson received a positive test result, the league seemed to take great care to postpone the game and ensure that he be given time to recover and participate.

The same cannot be said for last weekend’s game between the New Orleans Saints and the Denver Broncos.

Just before kickoff, it was revealed that every single quarterback on the Broncos’ roster had been ruled ineligible because they were in close proximity of someone who had been infected with the coronavirus.

Although all of the Denver QBs had not tested positive themselves, all were deemed high-risk and were excluded from the game as part of the NFL’s pre-determined COVID-19 protocols.

What resulted was an embarrassing 31-3 trouncing of Denver by the Saints, where the Broncos employed a wildcat offense and used a rotation of running backs to fulfill the quarterback’s role.

Perception is everything, and regardless of whether the league was simply following guidelines, it appears as if preferential treatment was given to a superior team (Baltimore) and a prime time game.

The Saints were originally favored by 6 points, but once the call was made that the Broncos would not field a quarterback, the odds were removed from the boards at most NFL sportsbooks.

The result of the Saints game has given them a much easier path to the #1 seed in the NFC as they were more or less granted a victory instead of the game being postponed until at least one Denver QB could be cleared to play.

Baltimore’s decimated roster will almost certainly allow for the Steelers to roll on to a perfect 11-0 record, when the game was initially predicted highly competitive.

NFL Playoff futures and Super Bowl 55 odds are now being affected by these decisions. Ravens and Broncos fans are feeling the sting right now, and it won’t be long before more teams are crying foul if this keeps up.

The integrity of the game is being threatened, and the legitimacy of the 2020-21 NFL Season is at stake.