Betting On The Browns vs. Bengals Odds On Halloween Night 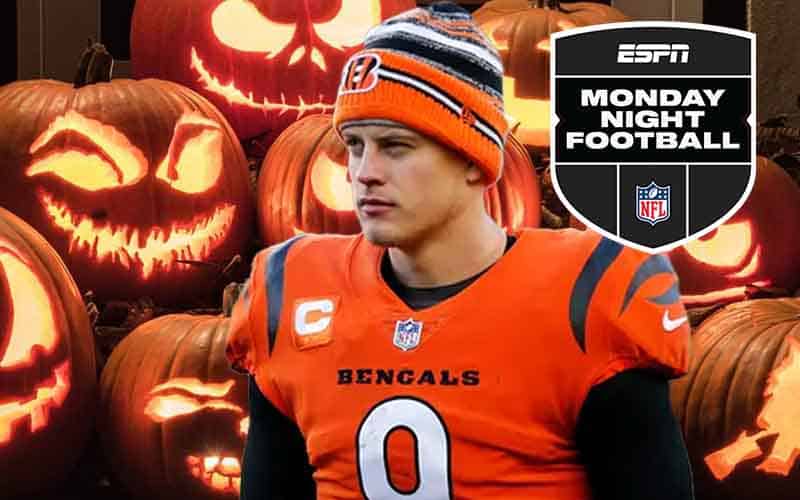 Tonight at 8:15 PM, the Cincinnati Bengals and the Cleveland Browns will match up for a Halloween edition of Monday Night Football, where the winner can keep pace in the AFC North Division.

The Baltimore Ravens lead the AFC North, and the Bengals are hoping to stay within a game or two while their star wide receiver, Ja’Marr Chase, heals up from a hip injury that will likely keep him out until late November or early December.

If the Bengals win tonight like NFL betting sites are projecting, they’ll match Baltimore’s 5-3 record but will remain in second place due to their loss to the Ravens on October 8th.

The Browns have played better than expected this season, only suffering one blowout loss thus far to the New England Patriots in Week 6. Cleveland had hoped to remain around .500 until after Week 11, when DeShaun Watson’s suspension concludes.

If the Browns lose tonight, they can start thinking about next year, as this mess will be too much for Watson to try and clean up over the last few weeks of the season.

The Bengals are favored by an NFL point spread of -3.0, suggesting that the game will come down to the final minutes, just like most other Browns games this year.

Cleveland is 2-5 against the spread this season, which doesn’t grant bettors a lot of hope for them to keep the contest with three points tonight. Alternately. the Bengals are 5-2 ATS so far, but the Ja’Marr Chase injury adds doubt to the equation as his presence in the lineup, or lack thereof, creates a production vacuum in Cincinnati’s offense.

When looking around at the various online sportsbooks that we frequent, there is not much room for line shopping to secure an easier path to victory.

The 3-point differential is consistent across the board, but there are some variances in the NFL moneyline odds that will garner more profit or require less risk.

Both BetUS and BetOnline currently feature a -170 moneyline on the Bengals to win, which is $0.05 less risk per dollar than what’s offered at Bovada.

Bovada does feature the highest moneyline for the Browns to win at +150, rewarding gamblers with $1.50 in net gains per dollar risked on a Cleveland win on MNF. BetOnline and BetUS have matched that +150 moneyline on the Browns as well.

With Chase out, who will carry the load for Cincinnati? The following NFL prop bets allow action on the Bengals’ receiving options and how they’ll perform.

Tyler Boyd and Tee Higgins appear poised to haul in the lion’s share of reception yards in Chase’s absence. If you agree with that assessment or not, be sure to lay some action on your preferred outcome before kickoff.