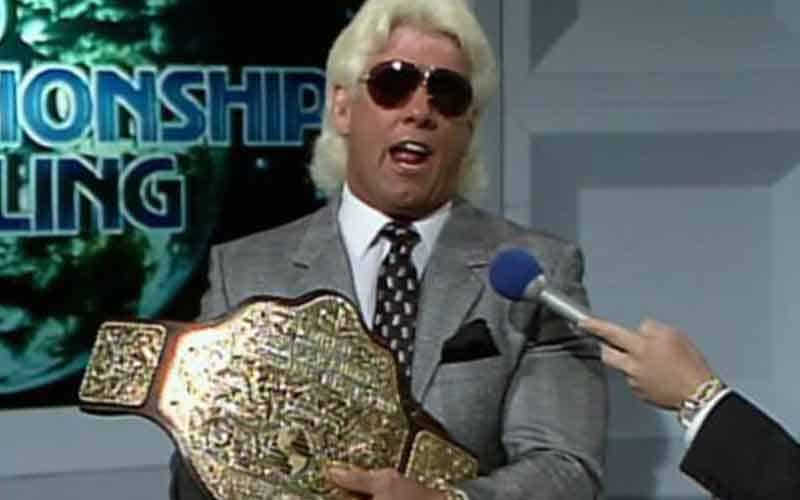 This Sunday evening in Nashville, Tennessee, “Also Spake Zarathustra” will be belted out over a PA system one last time as the greatest professional wrestler that has ever lived will style and profile his way to the ring for his final match.

“The Nature Boy” Ric Flair is this writer’s favorite wrestler, but it wasn’t always that way. In my youth, I spent summer evenings down at the local civic center booing Flair and hoping that the babyface (usually “The American Dream” Dusty Rhodes) would get better of him.

Flair is the perfect heel in that you love to hate him and want to pay to see the good guys get the better of him in a fight, a talent that he has employed like no other for the past 50 years.

In 2007, Flair had his last match in the WWE when he lost a retirement angle to Shawn Michaels. Flair, now 73, has not wrestled since his stint in TNA in 2011.

Flair’s last match will feature him in a tag team alongside Andrade El Idolo, current AEW wrestler and the husband of his daughter, Charlotte Flair of the WWE.

Flair and Andrade’s odds for pro wrestling betting indicate a near-certain victory. Translation – it will be difficult to secure much profit without significant risk on Flair’s betting odds.

The -2000 moneyline odds for Flair and Andrade to win reflect a 95% probability of victory. Because oddsmakers are so certain of this result, a wager of $20 is required to win $1 in the above line for entertainment betting.

While the notion of Flair losing his final match seems so unlikely, there is the potential for a swerve in order to set up a rematch at a later date.

Who Is Flair’s Final Opponent(s)?

Jeff Jarrett is the son of former wrestling promoter Jerry Jarrett and was one of the founding creators of Total Nonstop Action in the early 2000s. JJ is now a WWE executive and was able to secure permission to participate in this independent event.

Jay Lethal is a current AEW wrestler and has been mostly known for his career in Ring of Honor. While Lethal and Flair’s rivalry does not match his feuds of the 80s and 90s, it did produce the following epic exchange that will be replayed forever.

Will Ric Flair Bleed In The Match?

One of Flair’s trademarks is blading during the match in order to heighten the in-ring drama. If it is a big-time match in front of a large crowd, expect Flair to bleed.

Although the odds aren’t that great, when it comes to entertainment prop bets, this one is as sure of a thing as there is in the wrestling industry. Bet on blood!

Will A Guitar Be Broken In The Match?

One of Jeff Jarrett’s gimmicks is bringing an acoustic guitar to the ring and eventually bashing it over his opponent’s head or body. The below odds suggest that JJ will employ this tactic on Sunday night with $1 bets securing $0.50 in net profits if he does.