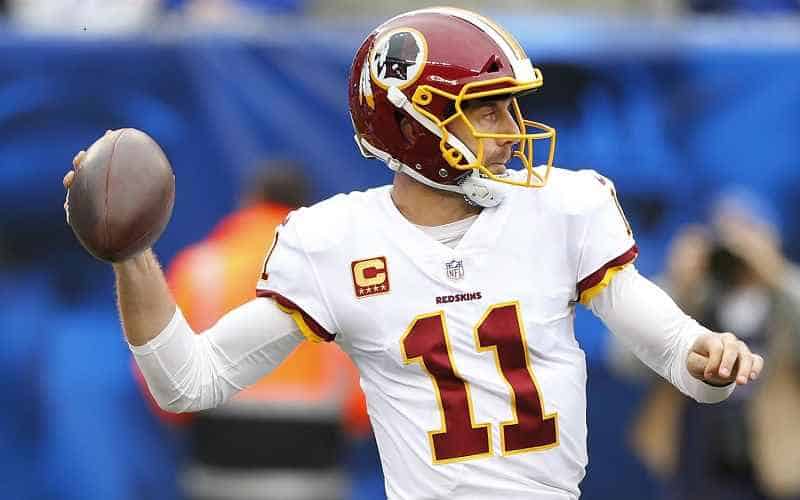 After missing over a full season of NFL action, Washington Football Team quarterback Alex Smith has returned from the physically unable to perform (PUP) list and has been cleared to participate in team activities when training camp begins on Wednesday.

Smith originally suffered an injury that broke the tibia and fibula of his right leg in November of 2018. Due to complications caused by an infection, Smith had to undergo surgery seventeen times and was at risk of his leg being amputated.

Although Smith’s return is a welcome one, his addition to the active roster is not likely to propel Washington toward the top of the Super Bowl 55 betting odds.

Smith can now be considered a journeyman because he is on his third NFL team, with former successful tenures with the San Francisco 49ers and the Kansas City Chiefs. In both cases, Smith fell out of favor due to the solid performance of younger quarterbacks Colin Kaepernick and Patrick Mahomes.

Now, it would seem that a similar situation has developed while he has been on the shelf in Washington, as the team drafted former Ohio State quarterback Dwayne Haskins in the first round of the 2019 NFL Draft.

With Smith out of the picture, Haskins was able to get a lot of time under center during the 2019 season. Haskins’ performance thus far has been mediocre at best and has Washington wondering if they’ve made the right choice in selecting him.

Despite their disappointment with Haskins, Smith’s return has made for a suddenly crowded quarterback meeting room in Washington that also includes recent Carolina Panthers castoff Kyle Allen.

Allen impressed many in Carolina last year, putting together several impressive performances in relief of the injured Cam Newton. Instead of rewarding Allen’s effort and keeping him around, the Panthers signed Teddy Bridgewater from the New Orleans Saints and allowed Kyle to enter free agency.

The Panthers also let go of longtime head coach “Riverboat” Ron Rivera, who is now the new head coach of the Washington Football Team. Could Rivera and Allen connect again and build upon last year’s successes in Carolina?

Alex Smith offers mobility and solid game management skills while Allen brings youth and a fearless, gunslinger mentality to the table. As long as Smith or Allen are under center, Washington has the potential to be competitive with just about any team in the league.

Add an aged Adrian Peterson to the mix as a workhorse running back and now you’ve got some potential to wear defenses down with the run while peppering them with short passes across the middle and toward the sidelines.

Despite the return of Smith and his potential to solidify the offensive efforts of Washington, oddsmakers do not share our enthusiasm and have produced NFL betting odds suggesting that the football team formerly known as the Redskins featured will finish last in the NFC East.

Considering the drama that the NFC East is often embroiled in, being predicted to finish last in the division is an indicator that Washington is in line for routine failure during the 2020-2021 NFL season, but for the reasons suggested above, they have a real shot at finishing near .500 if their defense can keep opponent’s scores reasonable low.

Despite what the NFL playoff betting odds suggest, if you have high confidence in the Washington Football Team and believe they will win the NFL East, a wager of $100 will earn $1600 if they can get it done. Your friends may laugh at you now, but you’ll be the one laughing come playoff time when you’re collecting your payout.