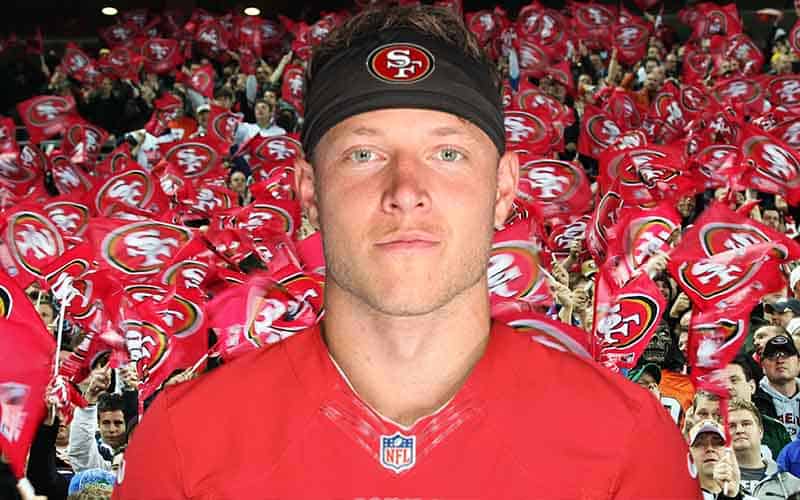 The San Francisco 49ers have acquired sixth-year running back Christian McCaffrey from the Carolina Panthers for four NFL Draft picks in a monumental trade that could propel them to a Super Bowl championship.

The move came after the Panthers announced that they were shopping McCaffrey to potential suitors – a sign that Carolina is intent on rebuilding from scratch.

The 49ers are currently leading the NFC West, but their 3-3 record after 6 weeks of action is due to playing under their expectations and dropping games to beatable opponents.

Their 3 losses are to the Chicago Bears, Denver Broncos, and Atlanta Falcons – franchises that a legit Super Bowl contender should have no issues getting beyond.

Adding an asset like McCaffrey to any NFL team will improve their chances of winning from week to week, but should gamblers rush to the sportsbook to bet on the San Francisco 49ers to go all the way?

The 49ers now find themselves as the fifth overall team listed in the odds for betting on Super Bowl LVII. While that may not sound like a certain indicator of a championship, bettors should take notice that the only teams ranked ahead of them are elite SB contenders.

While Christian McCaffrey’s arrival is certainly the rationale behind San Francisco climbing up the list of potential Super Bowl winners, their betting futures have only improved by 200 points since the preseason.

That’s because San Francisco was rated highly early on based on expectations surrounding their second-year QB Trey Lance. When Lance was lost for the season with a right ankle injury, their chances of success in 2022-23 slipped a little.

Now, with the inclusion of McCaffrey in the 49ers lineup, they’ve risen back up to top contender status, but are they worth betting on?

One element that is assisting San Franciso at the moment is the lackluster play of their NFC West Division mates. Both the Los Angeles Rams and Arizona Cardinals are struggling to keep their heads above water.

The Seattle Seahawks are playing out of their minds with Geno Smith replacing Russell Wilson at quarterback, but NFL oddsmakers don’t believe their success will last for the duration of the season.

The NFL futures odds for the NFC West title is where the 49ers have gained the most ground. Preseason NFC West futures featured San Francisco in second place with a +150 moneyline to win the division.

As of this morning, the 49ers have improved their standing in the moneyline odds by 285 points and are now the dominant favorite to win the NFC West and secure a top-four playoff seed in the National Football Conference.

The only question now is – can Christian McCaffrey stay healthy? He’s had trouble remaining in the lineup and has not played a full season since 2019.

McCaffrey’s health status is what makes betting on the San Francisco 49ers incredibly risky right now. However, that’s what sports betting is all about, so lay some action on their Super Bowl futures or division props if you believe they’ll win it all this season before oddsmakers get wise.