2022-23 NHL Betting Opens With Sharks vs. Predators Double-Header In Prague 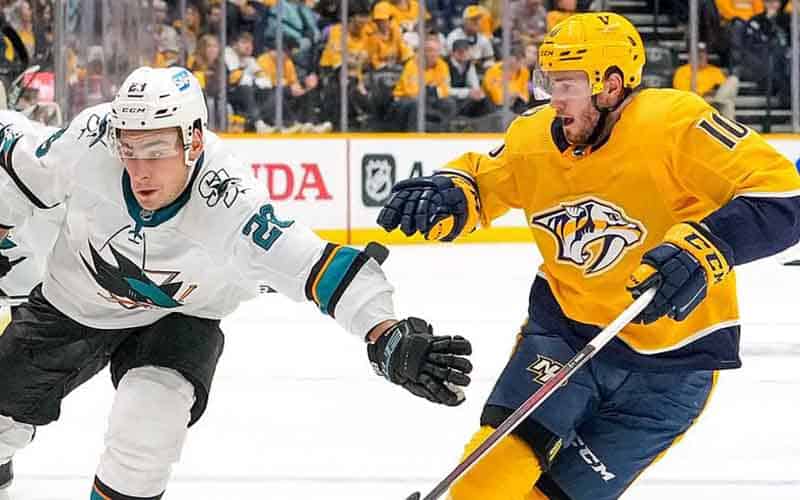 This Friday marks the beginning of the 2022-23 NHL season when the San Jose Sharks face the Nashville Predators in the first of two games hosted in Prague, Czech Republic.

Early lines at NHL betting sites favor the Predators for Friday’s game at 2 PM, and wagers on Nashville’s puck spread of -1.5 will cover if they win by 2 or more goals.

A similar line has been posted for Saturday’s 2 PM contest, but the moneyline odds are closer to even for both the Predators and Sharks. Just like rolling dice, the probability of a similar outcome narrows when attempted consecutively.

Tuesday, October 11th, features two more NHL contests, this time within the continental United States. The Tampa Bay Lightning will visit the New York Rangers, and the Sacramento Kings will host the Las Vegas Golden Knights on Tuesday prior to Wednesday’s full slate of NHL action.

Of the franchises playing on the opening three days of the season, only the Rangers and Lightning are among the top ten in the odds for betting on the Stanley Cup Finals Champions this year.

The Colorado Avalanche are last season’s Stanley Cup winners, beating the pesky Tampa Bay Lightning, who had won the prior two years. The Avalanche are favored to repeat as NHL champions, with the most likely Stanley Cup Finals contender from the East being the Toronto Maple Leafs.

The Lightning and their moneyline odds to win the 2022-23 Stanley Cup are set at +1200 and should be thought about as a low-dollar hedge considering their championship potential. They practically reside in the NHL Finals, and a $1 bet on their preseason futures odds will deliver a $13 payout if they hoist the Cup next summer.

Here are the current leaders in the futures odds for betting on the NHL Playoffs in regard to division winners:

In order to secure the largest payout possible, place your bet before the NHL season begins this Friday. Calling your shot early locks in the preseason NHL odds which are often the longest of the season for teams that skyrocket from the middle to the top.

There are also loads of NHL prop bets and live hockey betting lines that take action after the initial face-off through the third period.