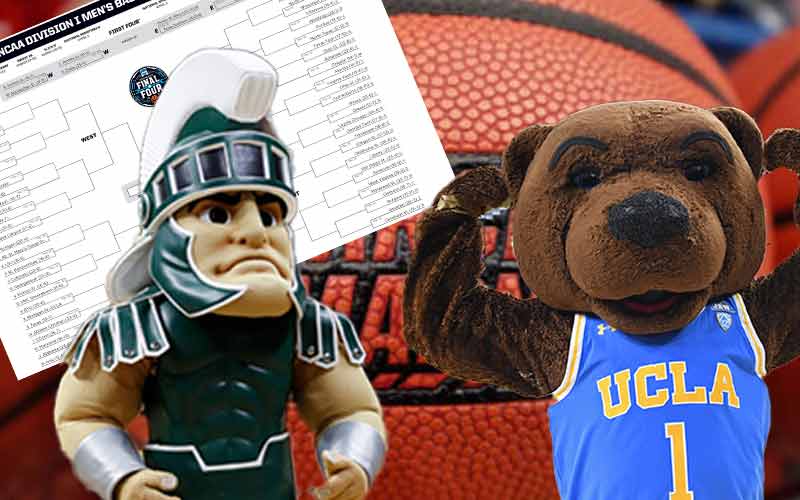 The web’s top-rated online college basketball betting sites have posted odds for March Madness following the Selection Committee’s production of their at-large bids yesterday. The final brackets for the NCAA Men’s Division I Basketball Tournament have been set, and following the cancelation of the 2020 tourney, teams are more focused than ever to earn a championship.

Before the proper 64-team tournament can begin, this Thursday’s First Four games must conclude, with the winners moving on to play another day, with the losers being eliminated from contention.

Online March Madness sportsbooks have produced betting lines for all four games, with one of them featuring a matchup of historic programs that are typically seeded much higher than 11.

A March Madness matchup between the UCLA Bruins and the Michigan State Spartans would typically come no earlier than the Sweet 16 due to the high seeds that these historic basketball programs usually achieve.

This year, bettors can take advantage of this gargantuan clash of college basketball giants on the first evening of the Tournament without having to wait until the Elite 8 or Final Four odds to be produced.

UCLA has the most NCAAB National Championships in the history of college basketball with 11, and are in fourth place all-time in tournament appearances with 48.

If the Bruins can overcome their 2 point underdog status and snatch a victory from the Spartans, they’ll assume the 11-seed in the East bracket and face BYU in the round of 64.

A wager of $100 on UCLA will provide cash winnings of $110 if you lay some action on their money line odds. The point spread combined with the over/under suggests a final score of Michigan St. 69, UCLA 67, but if you believe that the Bruins can summon a little magic from their legendary past, then get in on this profitable money line now before oddsmakers get hip and move the line.

Below are the remaining three game lines for Thursday’s First Four opening round of the 2021 NCAA March Madness Tournament. The programs featured in these three contests are typical of the play-in round, which further illustrates how uncommon it is to see a juicy pairing the likes of UCLA vs. Michigan State so soon in the NCAAB postseason.

Once these four contests are over, we expect to see a line plus dozens of NCAAB prop bets for each and every March Madness game. The entire focus of the sports betting world will narrow in on these March Madness betting lines over the 19 days of the tournament, and we advise that you do the same because before you know it, a champion will be declared and it’ll all be over.