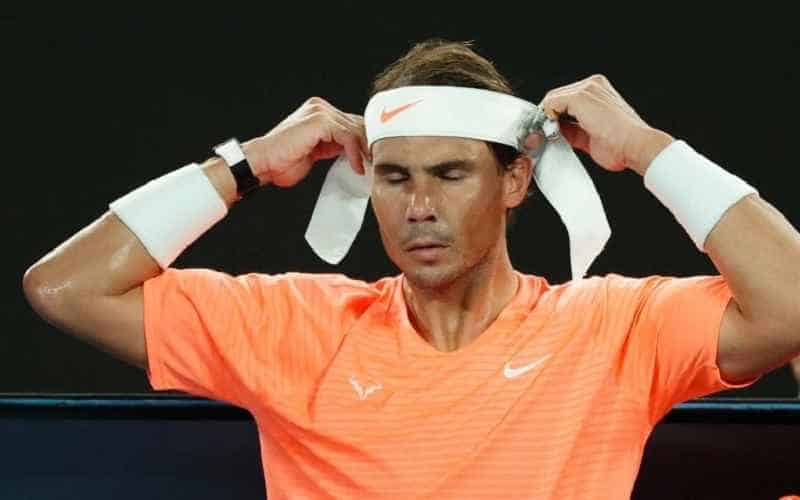 The men’s semifinal round of the Australian Open has been set, and thanks to a stunning 5-set victory by Stefanos Tsitsipas on Tuesday morning, Raphael Nadal has been ejected from the tournament

Online tennis sportsbooks had Raphael favored to advance to the semis and keep pace with top-seeded Novak Djokovic, but Tsitsipas had other plans and rallied to send the second-seeded Nadal packing to prepare for Wimbledon.

This is the deepest that Stefanos has been in a Grand Slam Tournament, tying his efforts from the French Open in 2020 where he lost to Djokovic.

Early odds for Friday’s Australian Open Men’s Semifinal match between Tsitsipas and Danill Medvedev only reveal the latter as the favorite, but international tennis betting sites have yet to offer an over/under or set spread.

The money line odds imply that Medvedev is expected to win, and coverts to a 71% chance of victory and moving on to the men’s final against the winner of Djokovic and Aslan Karatsev who are set to battle tomorrow.

The following tennis betting line for the Australian Open Men’s semi implies Djokovic will crush Karatsev and move on to the final match.

If these odds play out as implied, Djokovic will advance to the men’s final and compete for his ninth Australian Open title, and his third in a row.

Aslan Karatsev is in uncharted territory and has never advanced this far in any tournament of note. The sport of tennis is all about known quantities, as it is impossible to reach the peak of the game without facing the best the world has to offer.

Considering Karatsev’s inexperience on a global scale, oddsmakers are placing little faith in him to overcome the elite play that Djokovic routinely brings to the court.

That said, if Karatsev can continue this meteoric rise to international tennis prominence, his +800 money line odds will payout at 8x the amount that is risked on him to advance to the final round.

Perhaps it is Tsitsipas’ time to step forth into the limelight and take revenge for his defeat at the hands of Djokovic in last year’s French Open. If it is, he’ll have to get beyond the semifinal round first, and that will be no easy task as the 6’6” Medvedev has been playing well during the tournament.

If you’re on the go and are interested in laying some action on any of the remaining matches in the 2021 Australian Open, the top tennis sportsbooks feature mobile sports betting apps that can be accessed from anywhere with a solid connection to the web.

Apple and Android-powered devices are one click away from accessing the best tennis betting sites, and all it takes is just tapping on one of the links that we feature throughout this website.

Don’t delay, because the Australian Open Men’s Final is on Friday, and when it’s over, the odds will expire.