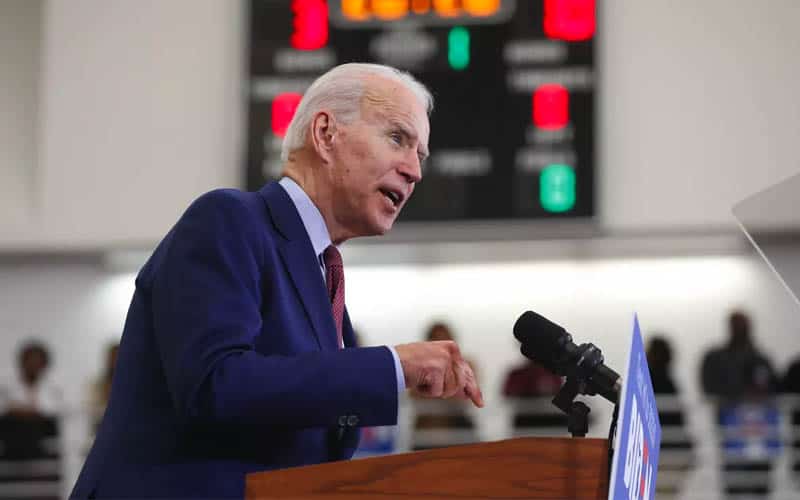 Odds to win the 2020 US Presidential Election have favored Republican incumbent Donald Trump every day since Joe Biden became the assumed nominee for the Democratic Party following Bernie Sanders’ exit from the race in early April.

On the first day of May, Biden’s chances of beating Trump have taken a hit across all legal US political betting sites and markets following the former Vice Presiden’s first-ever publicly denial of the sexual assault allegations made by Tara Reade, a former staffer during his time in the US Senate.

According to the latest general election betting futures at Bovada Sportsbook, Biden is now listed at +135 odds (was +120), which means a $100 bet will win $135 if he becomes the next President-elect. However, oddsmakers indicate that Trump is the perceived favorite and now has a better chance to win reelection with -120 odds, meaning a $120 wager would win $100 if the sitting President is elected to four more years in the White House.

The Intercept initially reported in March that Time’s Up, a movement established to provide survivors with legal counsel amid #MeToo, had denied assistance to Reade when she asked for help in January—before any votes had been cast in the Democratic primary. The story also broke around the same time Reade gave an interview with Rolling Stones’ Katie Halper.

Since then, Biden campaign staffers have issued nothing but vague denials in regards to the mounting evidence building for Reade. Pressure hit a boiling point last week after 1993 footage from CNN’s Larry King Live surfaced. The voice of the woman speaking is Reade’s mother, which has since been confirmed by CNN, who tells a story about her daughter and an unnamed US senator at the time that matches the allegations made against then-Sen. Biden.

CNN is deleting and censoring this video of their own broadcast which provides material evidence of Joe Biden’s sexual assault against Tara Reade.

Would be a shame if this clip went viral again.pic.twitter.com/JCsi1eOcWP

Biden, the now prohibitive favorite to win the Democratic presidential nomination, issued his first public in regards to the allegations made against him by Reade on Friday, May 1—over a month after the story has been well-known by those closely following the 2020 race. Of the evidence and claims by Reade, Biden gave little detail, and in regards to the allegations, he wrote: “They aren’t true. This never happened.”

We have lived long enough with a President who doesn’t think he is accountable to anyone, and takes responsibility for nothing. That’s not me. As a Presidential candidate, I’m accountable to the American people. https://t.co/Wm1666LF8A

If Bovada’s updated odds on political props are any indication, it’s that their oddsmakers are slowly backing off Biden’s previously “sure bet” chances of becoming the Democratic nominee for the 2020 presidential election.

Biden -650 (was -900) has suffered a massive drop in the past week and even worse when you consider his -1400 nomination odds the ex-VP was listed at after he was the only candidate still in the primary. It’s worth noting, however, that bettors will see a more substantial return on investment since -650 means a $650 wager wins $100—requiring nearly half the units but overall more shaky given recent events.

But now, the sportsbook sees a new challenger: None other than Hillary Clinton, the 2016 Democratic nominee, is becoming a favorite again by political gamblers. Clinton currently is listed at +850 (was +1600), which means a $100 bet would win $850 if the last presidential runnerup replaces Biden as the nominee at the convention.

Lastly, there’s a strong chance Biden, if he remains the party’s nominee against President Trump in the general election on November 3, will make a decision on his pick for Vice Presidential running mate sometime in July or August.

With that said, California Sen. Kamala Harris is currently the odds-on favorite to be Biden’s VP at +195, which means a $100 wager would win $195. However, if Clinton or anyone else (maybe even Bernie) becomes to Democratic nominee instead, then her and the rest of the female-favored field will need to be reassessed. For now, here are the May 1 betting odds for both the Democratic nomination and VP pick for Biden or other last-minute swaps.