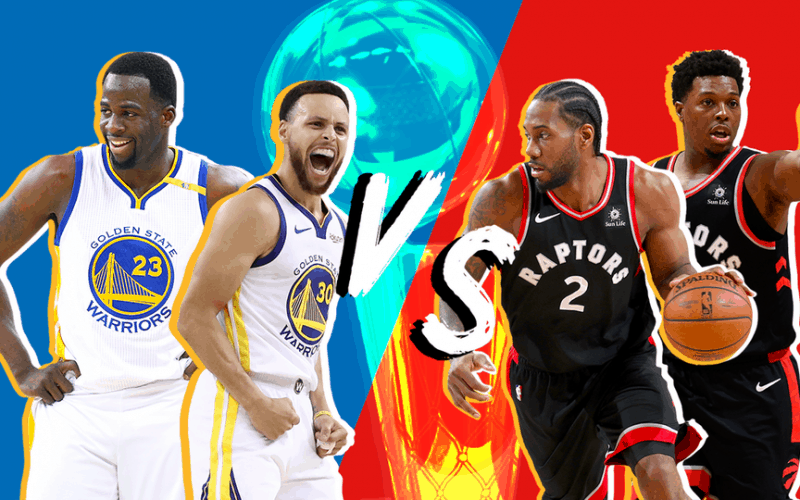 It’s an NBA dynasty vs. a first-time finalist.

It’s Durant vs. wanting to be needed.

It’s Drake vs. the sideline.

Game 1 tips off tonight in Toronto, and the Golden State Warriors — who are going for a 4th title in 5 years — are the heavy favored to beat the Toronto Raptors in the best-of-7 series.

The Warriors were heavily favored to win the NBA championship before the 2018-19 season began while the Raptors were among the top 5 most likely teams in the NBA to win it all at pretty much every sportsbook.

However, when it comes to tonight’s Kevin Durant-less (and Boogie-less too, I guess) game, there isn’t a clear consensus on which team is more likely to win.

The Warriors opened as a 1-point favorite for the Game 1 point spread, but public money has caused the betting line to flip to the Raptors being favored at sportsbooks, like BetOnline.

The money line mirrors the spread for the most part, and oddsmakers are predicting roughly around 213.5 to 214 total points scored from both teams on the over/under.

There are hundreds of prop bets available for the Raptors-Warriors, so be sure to check the prop section at the betting sites we recommend.

Here are a few of the proposition wagers you can make on what will happen during the series or individual games during the 2019 NBA Finals.

Series: Who will score the most points?

Series: Who will score the most 3-point field goals?

Series: Who will have the most rebounds?

Series: Who will have the most assists?

Series: Who will have the most steals?

Series: Who will commit the most personal fouls?

Oh, you thought team and player statistics were the only props you could bet on?

For those who don’t know, Drake is one of the biggest and best-selling rappers in the world and was born in Toronto.

Drake also happens to be a Raptors courtside season ticket holder who is known for having fun on sidelines. Some even call him the team’s “unofficial global ambassador.”

But recently, he caused some “controversy” when he gave Raptors head coach Nick Nurse a shoulder massage during a game in the Eastern Conference Finals.

Fortunately for all of us, oddsmakers decided to take advantage of this and have some fun with Drake and the Raptors first-ever trip to the finals.

Below you’ll find all the Drake-related prop bets you can put money for the NBA Finals.

How many times will ABC broadcast team say “Drake” during Game 1?

Will Drake not attend any Finals games in Toronto?

Will Drake attend any Finals games at Golden State?

Will Drake watch any Finals games at Jurassic Park?

Will Drake wear a hooded shirt during Game 1?

How many games will the Raptors win with Drake in attendance?

Will Drake get a tattoo of Kawhi Leonard’s name, nickname or number by the end of 2019?

Will the ABC broadcast show image of Drake’s 30 (Curry) and 35 (Durant) tattoos?

Will the ABC broadcast show Drake give any player a high five during Finals?

Will the ABC broadcast show Drake and Nick Nurse contact each other during Finals?

Will the ABC broadcast show Drake and Kevin Durant contact each other at Game 1?

Will Drake say “Kawhi” in any track on his next album?

Everything You Need To Know

Finally, to help with your bets — and so you don’t miss a second of the NBA Finals action — we’ve included a brief breakdown of where you can watch or stream the game, a look at the series head-to-head this season, stats from both teams in the playoffs, and the full schedule for the Raptors-Warriors matchup.

Also, be sure to check out our 2019 NBA Finals preview, so you can head into tonight’s game with all the pregame info you need to make an educated bet.

Best of luck on your bets, and hopefully your bankroll goes from 0 to 100, real quick!