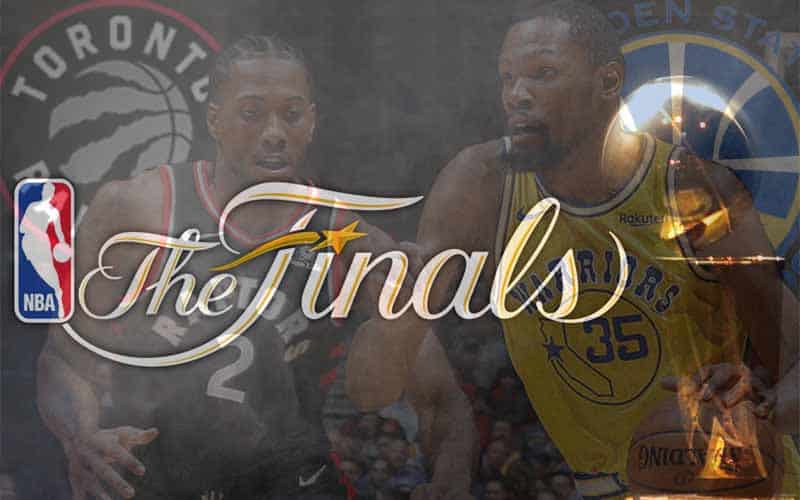 Over the weekend we learned that the Toronto Raptors would advance to the NBA Finals to take on the two-time defending champions the Golden State Warriors.

The Golden State Warriors are looking to win their 4th NBA Finals in 5 years, and their 3rd NBA Finals in a row. There is no question to which team has been the dominant team over the past half-decade, but Toronto is looking to derail their legacy.

The Warriors told media sources that Kevin Durant will not be able to play in game one of the series. Durant is arguably the Warriors best player but suffered a calf injury during game five against the Houston Rockets.

Going into this series, smart people would put their money on Golden State to win the 2019 NBA Finals, and for a good reason, they have won the last two. This year is different already with Kevin Durant sitting out game one and possibly longer. Even if Kevin Durant doesn’t see the court, the Warriors would still be favored by online sportsbooks. The splash brothers were used to taken care of business long before KD joined the team. However, without KD it does make the matchup closer.

The Toronto Raptors were not favored to make the 2019 playoffs, most bettors picked the Milwaukee Bucks to advance, but the Raptors took home the Western Conference Championship in only six games. Led by NBA stars Kawhi Leonard and Marc Gasol the Raptors are looking to bring home their first franchise NBA Championship. It would go nice with their first-ever Western Conference Championship they just won. Leonard has been lighting it up this postseason and hopes to lead his team into the record books with an underdog Finals win.

Betting On The Finals

Since game lines and futures are skewed heavily into the Warriors favor, many bettors are looking for other ways to make money without betting against Golden State. Fortunately for those bettors, online oddsmakers have beefed up prop betting for the 2019 NBA Finals.

Prop bets cover a wide range of topics including triple-doubles, over-unders, 3pt attempts, and more. Bovada has over well over 100 different prop bets that can be placed on the NBA Finals.

How To Watch Game 1 of The Finals

The NBA Finals are scheduled to begin on May 30th, 2019, with game one in Toronto. The live broadcast will begin at approximately 9 pm EST and will air on ABC. You can also live stream game by visiting WatchESPN or downloading the app.