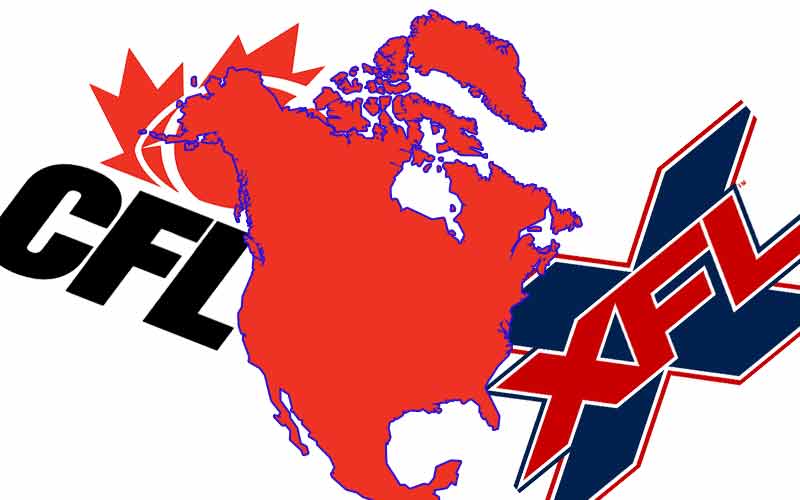 Following weeks of speculation sparked by meetings between the Canadian Football League and the XFL, a statement has now been issued by both leagues that confirms a potential partnership is brewing.

Legal online sportsbooks have been offering odds on whether or not the upcoming XFL or CFL seasons will occur, and are also accepting action on if the two leagues would merge into one.

These odds are no longer available, but Canadian Football League betting sites still have Grey Cup futures on the boards, suggesting that there is still potential for the CFL to complete a season in 2021.

The CFL has experienced severe financial struggles in recent years, a plight which COVID-19 only exacerbated. While the XFL is not necessarily a picture of fiscal fortitude, they are backed by a new investment team backed by Dwayne “The Rock” Johnson and RedBird Capital Partners, who recently acquired a stake in Major League Baseball’s Boston Red Sox.

Per a recent press release from both leagues, the XFL and CFL intend to partner up in the immediate future, although no timetable has been given for when the leagues would officially join together.

In fact, the three combined statements from league officials discloses nothing concrete other than they intend to work together and provides no potential solution for the various rule differences and ownership strategies that each pro football league employs.

The XFL owns each team in the league, a rarity in professional sports, while the CFL features franchises that are owned individually.

CFL seasons run for 18 games while the XFL campaigns last for 10. Then there are the different field dimensions and in-game rules and regulations to consider.

The XFL was not planning on beginning play again until the spring of 2022, but the CFL is gearing up for a summer 2021 start date. While XFL betting odds, at least as we knew them, may not appear again, once these two leagues are merged, there is the potential for this new pro football union to make a significant impact on broadcast television ratings.

The cross-country North American pro football Continental championship has the makings of a title that is worthy of intrigue, and judging by the attention that these talks are causing, there’s plenty of interest to go around.

There is debate as to whether there’ll be regular-season interleague play, but there does seem to be agreement on having a championship game between the two divisions.

This will require the CFL to align their rules to adhere to American standards, and would likely be the best move to establish a legitimate development league for the NFL.

It would not be a good look if an upstart XFL team was able to handily win a title over a CFL team with decades of history behind them, so if the USA is offering up a higher level of play overall, it’ll become apparent much earlier on with interleague games. Either way, the true victors will be North American football fans and bettors, as both leagues will continue to survive.