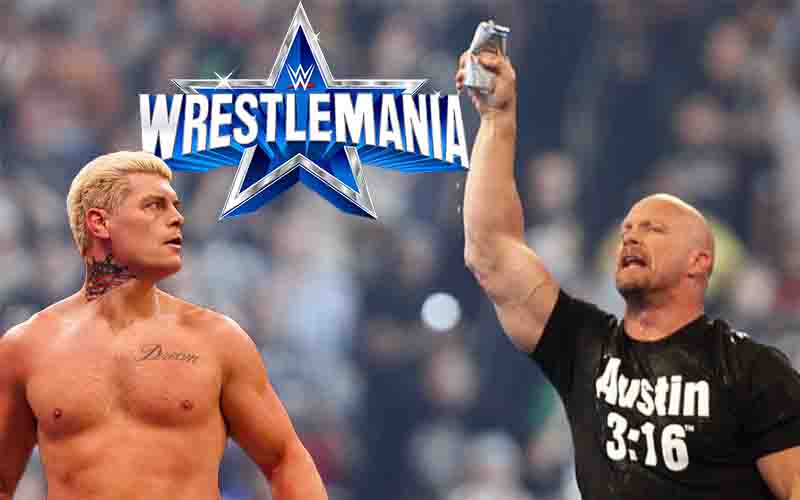 WrestleMania is the Super Bowl of professional wrestling, and appropriately, more odds for entertainment betting are produced for this 2-night event than any other in the genre.

What used to be a three to four-hour pay-per-view event has now blossomed into two full nights of action that allows for most of the WWE’s roster to try and achieve a “WrestleMania moment.”

The event is intended to wrap up the year’s storylines and feuds, celebrate the latest WWE Hall of Fame inductees, and is also a time for surprise debuts that are new to the promotion.

Online sportsbooks have posted lines for the entire WrestleMania card, and pro wrestling betting sites have also created props regarding two special appearances – one scheduled and the other has been lightly teased since their exit from rival promotion AEW (All-Elite Wrestling).

What Will Happen First – WrestleMania

Stone Cold “Steve Austin” is inarguably one of the biggest stars that professional wrestling has ever produced, so it is only natural that the WWE would want him to appear on their biggest show of the year as often as possible as a treat for the fans.

He’s scheduled for an interview at WrestleMania 38, but the above entertainment prop bets are implying that Stone Cold may just have one more stunner left in him.

Kevin Owens has been taunting Austin for weeks on WWE television, so a confrontation seems imminent. However, in order to earn any money by betting on Stone Cold at WrestleMania 38, a lot more risk than the potential reward will be required.

For instance, a wager of $20 would be needed to earn a dollar on a Stone Cold victory over Kevin Owens. It will take a $10 WWE bet to earn $1 on a Stone Cold Stunner being delivered to KO this weekend.

Wrestling bettors that expect a swerve and a Steve Austin whipping by Owens can secure solid payouts no matter which way they decide to lay their action.

Will Cody Rhodes Return To The WWE?

Cody Rhodes was one of the founding Executive Vice Presidents of AEW upon its founding just 3 years ago, but now that relationship has soured and he’s taking his talents back to the WWE – or is he?

The WWE has teased Cody’s appearance on-air while also developing a storyline where Seth Rollins is in need of a WrestleMania opponent for 2022. Now, pro wrestling sportsbooks figure it’ll be the American Nightmare that fills that void and are projecting Cody Rhodes to win if he does appear.

WrestleMania 38 betting odds are posted at most of the major online sportsbooks that we endorse here at SBL, so be sure to shop to wrestling lines that are the most advantageous to you and your bankroll for this weekend’s action.