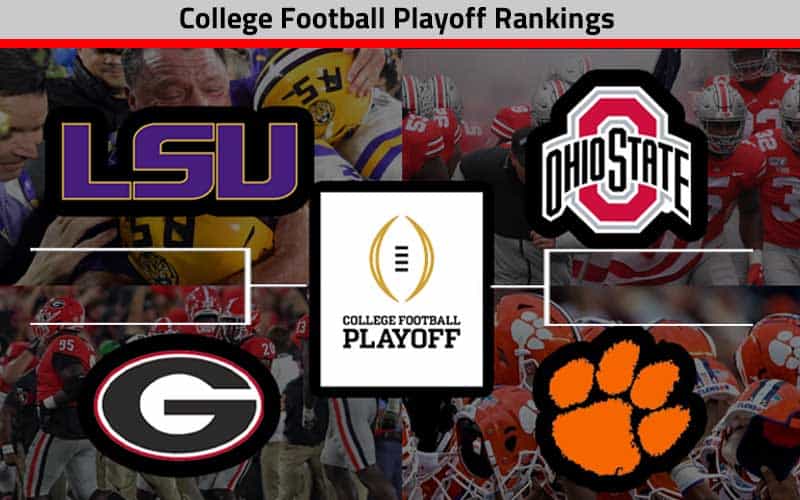 The second official College Football Playoff rankings of 2019 were released last night and, as expected, there’s been a shakeup in the top four.

Last week, the Ohio State Buckeyes topped the CFP poll, followed by the LSU Tigers, Alabama Crimson Tide, and the Penn State Nittany Lions. But after losses by Alabama and Penn State this past Saturday, the top teams would have to change.

Enter last night’s rankings reveal on ESPN: LSU jumped Ohio State to take over the #1 spot, forcing the Buckeyes to #2 in the poll. The reigning champion Clemson Tigers earned the third spot with the Georgia Bulldogs sliding into the fouth.

Easily enough, the top four teams in the College Football Playoff poll are also the four teams with the best national championship betting odds, according to BetOnline, albeit the order is slightly off.

Although they are currently ranked #2 in the CFP poll, Ohio State has the best championship odds at +200. First-year head coach Ryan Day has led his team to a 9-0 record in 2019, including a 73-14 rout of Maryland over the weekend.

Ohio State also has Heisman Trophy hopeful Justin Fields under center. Speaking about his quarterback, Day said Fields’s impact has been “huge” over the season and he just keeps getting better.

Ohio State is not the only top team with a Heisman favorite. LSU and QB Joe Burrow– who actually started his career with the Buckeyes– have +250 championship chances.

If Burrow can keep up his pace, which included a 97.3 QBR performance Saturday, the Tigers will have a showcase full of hardware at season’s end.

After defeating the Crimson Tide this past Saturday, the Tigers are primed for a championship run. LSU head coach Ed Orgeron even acknowledged his team’s aspirations after the win.

The reigning CFP champs in Clemson have +300 odds this season, which isn’t too far off of Ohio State’s top chances. Like OSU and LSU, Clemson has remained undefeated throughout 2019.

The team, however, has not performed up to preseason expectations.

“We’re one of those teams [in the College Football Playoff poll]. Hey, we’re in the mix, we’ve just gotta keep winning,” Swinney said last week. “They don’t give any trophies after nine games last time I checked. Thank goodness, right? We’re just honored to be one of those teams that has a chance.”

The final team in the CFP top four is Georgia with +800 championship odds. With a single upset loss against South Carolina, the Dawgs are 8-1 on the season.

Despite the loss, Rob Mullens of the CFP Committee said that Georgia’s wins over Florida and Notre Dame were enough to give them the fourth spot over Bama.

“In the end, Georgia’s two wins over ranked teams made the difference in the number four spot. Alabama clearly is a strong team, but the committee gave the edge to Georgia,” Mullens said.

As for the Crimson Tide, the #5 team in the CFP poll has +900 odds of winning the 2020 national championship.