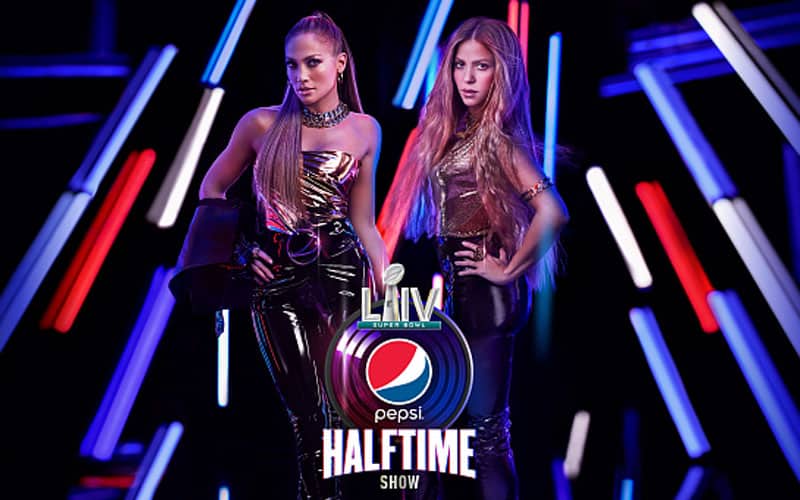 And the odds will make you wanna speak Spanish. 😉

After Maroon 5’s Super Bowl LIII halftime show last year was one of the least-watched in over a decade, the National Football League may have found the solution for Super Bowl LIV’s performance: Latina pop superstars Jennifer Lopez and Shakira.

The NFL, Pepsi, and Roc Nation announced Thursday the duo would headline the Super Bowl LIV halftime show at Hard Rock Stadium in Miami Gardens, FL on February 2, 2020. The announcement was followed by teasers on both singers’ Twitter accounts.

In speedy fashion, BetOnline posted prop bets for the performance shortly after the announcement.

While most of the props appear to be written by a group of 14-year-old boys hoping to see a woman’s skin for the first time, some of the bets are pretty interesting.

But sex sells, so we’ll cover the naughty odds first.

Aside from their singing abilities and many other talents, both JLo and Shakira are known for their fashion statements. Lopez’s green Versace chiffon from the 42nd Grammys stunned audiences and Shakira’s low-cut romper during VH-1 Divas 2002 left Vegas speechless.

With their bodies, dance routines, and style, it’s possible that their outfits could be considered revealing to the general audience. According to oddsmakers, Lopez is the most likely to be the only one to show cleavage during the performance at +125 odds.

Chances are +150 that Shakira is the only one to show cleavage, but +500 odds that they both show some.

Who will show cleavage during the performance?

Chest cleavage is not the only cleavage that can be bet on during the halftime show. Bettors also have the option of placing a wager on another one of JLo’s huge assets: her butt and its cleavage.

JLo’s butt has always been a focal point for fans and spectators, revived again in 2019 after the release of the “Medicine” music video. For the Super Bowl, -300 odds say Lopez will show butt cleavage during halftime.

Oddsmakers predict that the influential movements will be on display during Super Bowl LIV, even from Lopez.

BetOnline gives JLo -150 chances of doing the Shakira hip shake during their performance, a move that will surely electrify the crowd.

Will Lopez do the Shakira hip shake?

Super Bowl halftimes and wardrobe malfunctions have been synonymous since the Justin Timberlake-Janet Jackson debacle of 2004. Since the accidental nipple exposure from Super Bowl XXXVIII, nothing has quite matched that level of notoriety.

BetOnline doesn’t think this year will feature its own version of 2004, giving odds of a wardrobe malfunction -300 chances.

Will there be a wardrobe malfunction?

The final risque prop feels more like a dream than an actual possibility. Currently, Shakira and Lopez are given -1500 odds of not kissing during the halftime show.

Oddsmakers may be hoping for a repeat of the Britney Spears-Madonna-Christina Aguilera kiss from the 2003 Video Music Awards, but it is not likely.

Will Shakira and Lopez kiss?

Something that is likely between JLo and Shakira’s lips, however, is the chance they will both sing in Spanish.

With their backgrounds and multilingual skills, oddsmakers give the duo -500 odds of both singing in Spanish during the show.

Will Shakira and Lopez both sing in Spanish?

Back in 2012, Lopez and Enrique Iglesias headlined a tour across Canada and the United States. And since Super Bowl performers usually bring another act along with them, it would make sense that another Latin pop star would be invited by Lopez and Shakira.

Nevertheless, oddsmakers do not think Iglesias will appear during the show, giving the Grammy winner -500 odds of being left out.

Will Enrique Iglesias make an appearance on stage?

Iglesias shouldn’t feel bad, though. Roc Nation founder Jay-Z isn’t expected to be shown during the broadcast either.

Despite running the company that is co-producing the show and being one of the biggest names in rap music, Jigga’s odds of not appearing are -200.

Will Jay-Z be shown during the broadcast?

To learn more about wagering on the NFL’s biggest game, head on over to the SportsBetting.Legal Super Bowl Betting Guide.