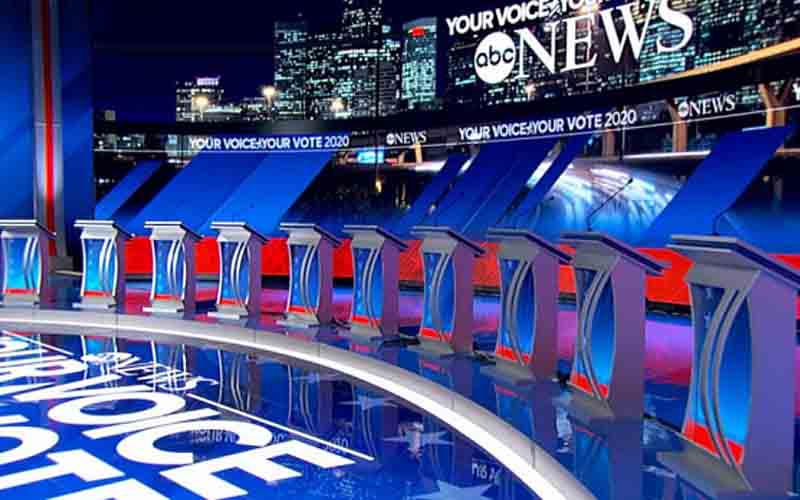 Update 9/12/19: Even more prop bets are now available for tonight’s debate! We’ve included the odds for each prop, and which sportsbook has them, immediately following yesterday’s story.

While it’s always important to listen to what candidates say during political primaries, BetOnline’s prop bets for the third Democratic debate place a greater emphasis on the matter.

Overall, the political bets for the debate range from how long candidates will speak to their polling averages next week.

Nevertheless, a majority of the props focus on what the candidates will say and how often they will say it, including key phrases like “background checks” and “climate change.”

With the recent acts of gun violence throughout the United States, four of which since the last Democratic debate in July, the phrase “background checks” is likely to come up during the debate. The over/under is 5.5 “background checks” with -120 odds on both.

How many times will “background checks” be said?

Several Democrats participated in a CNN-hosted climate change town hall event last week. It’s likely that tomorrow’s debate will feature some remnants of the forum. The over/under for “climate change” is 13.5 total times. Like all over/unders for these debate prop bets, both have -120 chances.

How many times will “climate change” be said?

Hurricane Dorian was a Category 5 that destroyed parts of the Bahamas in early-September. The over/under for “Dorian” is 2.5 times, which could range from discussing the hurricane, relief for the Bahamas, or Trump’s Alabama map controversy.

How many times will “Dorian” be said?

On the topic of Trump controversies, saying “Russia” has an over/under at 3.5 mentions for the debate. There are also rumors of a Russian-American espionage scandal that could come up in Houston.

How many times will “Russia” be said?

During the July debate, Pete Buttigieg gave America one most quotable lines, saying that regardless of their policies, Republicans will always call Democrats “crazy socialists.” The over/under for “socialist” is 1.5 total utterances tomorrow.

How many times will “socialist” be said?

Notwithstanding the props, talk time for candidates is key in getting plans and viewpoints across. Elizabeth Warren is favored among Democrats to get the most speaking time at +225 odds. Joe Biden is a close second at +250 odds with Bernie Sanders third with +400 odds.

Which candidate will receive the most speaking time?

There’s a chance something a candidate says during their talking time is not completely factual. Whether it’s an accident or not, oddsmakers are taking action on these non-facts. The over/under is set at 6.5 total alternate truths.

How many non-facts will be said by candidates?

BetOnline is also taking action on Biden’s non-facts specifically. The over/under for Biden is 1.5 non-facts with -120 chances of either one hitting.

How many non-facts will be said by Joe Biden?

In nearly all polls, including the freshly released Economist/YouGov poll, Warren is polling higher than Sanders, 26% to 16% respectively. Coincidentally, the odds favor Warren at -175 for having a higher national polling average on September 19, compared to Sanders’ +135 odds.

Who will have a higher national poll average on September 19?

If ABC moderators try to emulate CNN moderators tomorrow, the trend of telling the candidates that their time is up is expected to continue. The over/under for “time is up” is 3.5 times.

How many times will moderators say “time is up”?

The House Judiciary Committee Chairman Jerry Nadler says there’s an ongoing “impeachment investigation” of Trump. This could come up during the debate, along with general desires to impeach the president by the candidates. Oddsmakers predict that a candidate will say “impeach” at -200 odds on Thursday.

Will any candidate say “impeach”?

While Trump was generally quiet during the first Democratic debate, only issuing a “BORING!” tweet, he was more active during the July debate. But for the Houston debate, the over/under on Trump’s tweets is 3.5 total with -120 odds on each.

How many times will Trump tweet during the debate?

Will “Trump” be said in any closing statements?

Within minutes of the Detroit debate, protesters interrupted the debate, yelling “Fire Pantaleo,” in reference to Staten Island police officer Daniel Pantaleo and his 2014 killing of Eric Garner. In Houston, however, -300 odds say that the debate will not be stopped by any political challengers.

To watch the third Democratic debate and keep track of these props, tune into ABC, ABC News Live, or Univision between 8 and 11 p.m. ET tomorrow night. The debate will also be available to stream on ABCNews.com and YouTube.

A list of each candidate’s 2020 nomination odds is also provided below, including Democrats that did not qualify for this debate.

Here you’ll find the odds for the Houston Democratic debate prop bets that were posted after our story was initially published on Wednesday, September 11.

Which candidate will be tweeted about the most during the debate?

Which candidate will be the most searched during the debate?

Will “Trump” be said in an opening statement?

How many times will “background checks” be said?

How many times will “climate change” be said?

How many times will “Hurricane Dorian” be said?

How many times will “Russia” be said?

How many times will “Obama” be said?

How many times will Joe Biden mention “Obama”?

How many times will Donald Trump tweet during the debate?

Will “impeach” be said by any candidate?

Will “Trump” be said in any closing statement?

Will Beto O’Rourke speak Spanish during the debate?

How Many Times Will Elizabeth Warren Mention “Obama”?

How Many Times Will Joe Biden Mention “Obama”?

Will OJ Simpson Tweet About The Debate While It Occurs?