Patrick Mahomes, Conor McGregor Lead Bitcoin Betting Odds For Next Athlete To Be Paid In BTC 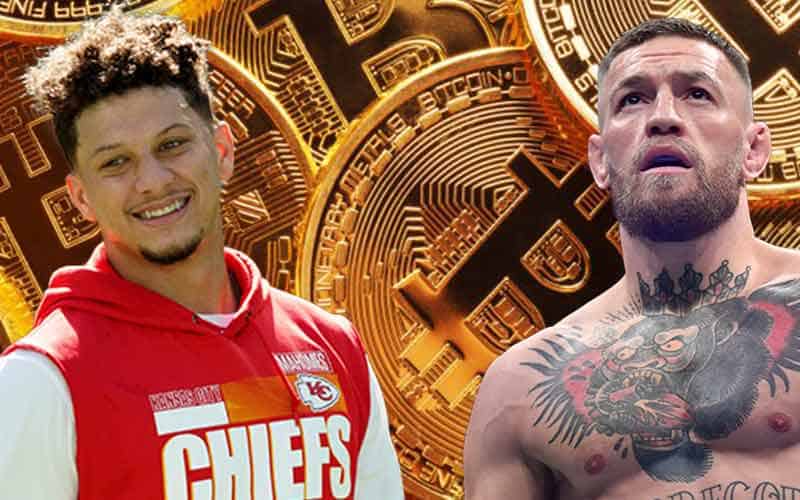 Cryptocurrency market values are currently in flux with a strong downward trend. While this scenario may scream for investors to buy low, is the long-term outlook for BTC grim?

Entertainment sportsbook sites have posted the following betting line asking which professional athlete will be the next to request that their game check be issued in Bitcoin, but is that a likely currency considering the current valuation and trend?

Who Will Be The Next Athlete To Be Paid In Bitcoin?

While these odds for Bitcoin betting may seem a little outlandish and prospective, the line does mention the word “next,” indicating an athlete has already opted for BTC payments in lieu of the US Dollar.

Per a recent report from Coindesk, Saen Culkin, a tight end for the Kansas City Chiefs will receive his entire 2021 NFL salary in Bitcoin. The value of his 2021 contract is $920,000, but what happens if BTC continues its downward movement following that disbursement to his digital wallet?

KC Chiefs’ quarterback Patrick Mahomes currently holds the largest contract in NFL history and has a history of investing in cryptocurrency, including the issuance of NFTs earlier this year.

Mahomes has expressed his frustration on social media over the “cryptocurrency crash” in recent months, so it can be assumed that he is heavily invested in altcoins and other digital monies. If Patrick has hired a worthy financial investor, they’ll steer him toward a more lucrative altcoin with the potential for a higher yield.

UFC fighter Conor McGregor’s odds are tied for the lead with Mahomes to become the next athlete to accept a Bitcoin payday. It would seem more likely for a BTC payout to occur for a singular event rather than a player opting for his entire season’s salary in crypto.

There’s no question that cryptocurrency markets will regain traction before long, but the same certainty cannot be expressed in regard to BTC specifically. Bitcoin mining operations are not environmentally friendly, and as the Bitcoin blockchain gets more lengthy, transaction times will increase as well.

This could spell doom for Bitcoin and open the door for newer and more well-designed cryptocurrencies to step in and become the dominant force.

We’ve long assumed that online sportsbooks were early investors in BTC, and thus, are now issuing payouts using Bitcoin at pennies on the dollar.

Is the above financial prop bet simply hype from the online sportsbook community to spark more interest in BTC and up the value (and dependency) once again?

While the price of Bitcoin has been hovering around $30,000 as of late and is tempting to buy low, it would be wise for investors to consider the potential for it to continue to decline.

Is Bitcoin the MySpace of cryptocurrency and is the Facebook equivalent already in place? Perhaps. Burgeoning cryptocurrencies such as Cardano (ADA) are already surging in value and attaining an increasing foothold in the market, but that could change if influential parties are able to reign in BTC’s bad publicity and reestablish it as the go-to altcoin.