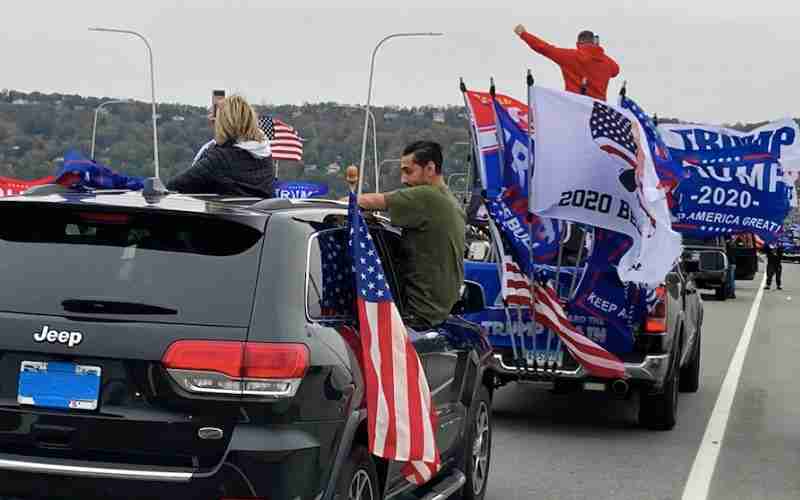 With record numbers of Americans participating in the 2020 Presidential election via mail-in ballots and early voting, there is the potential for a record voter turnout today.

Regardless of how anyone feels about President Trump’s antics over the course of the last ten months, no one can deny that he has a large support base that has been coming out in full force as the election date approaches.

Reports of caravans of Trump supporters creating blockades for DNC related campaign events have been popping up on social media, and the President has endorsed and shared their actions on Twitter.

What’s becoming clearer by the President’s comments and the behavior of his supporters is if Trump loses, the results will be contested – in the courts and possibly on the streets.

Popular political sportsbook MyBookie has produced the following betting line implying that the results of the Presidential election will be contested and that the loser will not concede until after November 13th.

Day The Loser Will Concede The 2020 US Presidential Election?

The above political prop bet reveals that the results will likely hang in limbo for at least the next ten days and probably more if the votes in battleground states are close.

In fact, a concession date of November 13th or later is the only option that is listed with negative odds, meaning that all other outcomes are so unlikely that political betting sites are willing to award more money than the bettor will risk.

It creates for profitable payouts, but also poses the potential for a long-term battle for the White House that might be decided by the courts.

Despite these odds, Politico is reporting that recent remarks from Trump at a rally in Pennsylvania indicate his preference for a clear-cut winner on November 3rd.

“The Election should end on November 3rd, not weeks later!”

If Trump gets trounced by Biden tonight, then there won’t be much room for Trump’s legal team to wrangle up an argument that those results should be overturned or questioned.

Although the below Presidential election betting line reveals an 80-point lead for former Vice President Joe Biden, the actual Electoral College vote totals will be much closer.

If Biden ends up winning the Presidency tonight, then we can assume that his supporters were content to stay home and vote in silence, because visibly, there’s no comparison between Trump and Biden’s ground support.

Large flags on 20’ poles and caravans of “Trump trains” rolling up and down US highways dwarf the Biden/Harris yard signs, and those odds on Trump winning his reelection bid are starting to look more attractive – but don’t wait!

We expect the odds to narrow over the course of the evening, so if you want to earn money betting on Trump’s reelection, bet now and earn the highest potential cash payout. The same cannot be said for the concession odds, as that is a political betting line that will remain until at least the 13th of November, assuming one of the 2020 Presidential candidates doesn’t concede first.