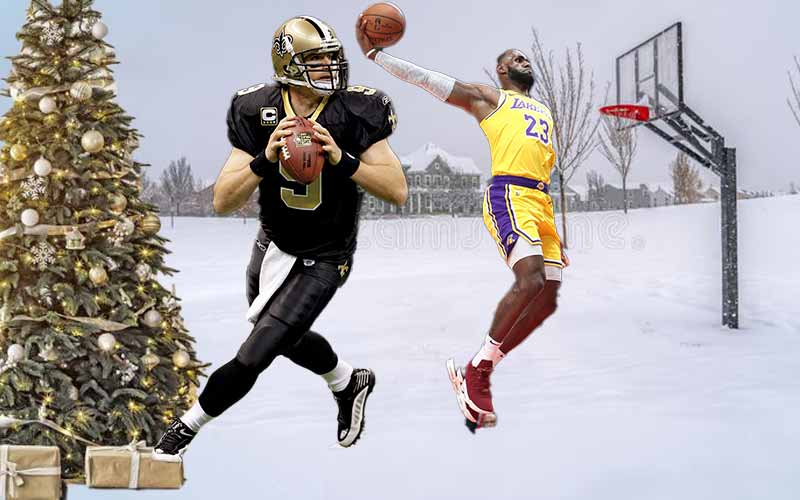 With the way 2020 has been going, Christmas can’t get here fast enough. There must have been a lot of good boys and girls this year because Santa Claus has delivered a hefty sack full of sports to bet on, including NBA Basketball, and a dash of playoff relevant NFL football to top it all off.

If it seems like only a few weeks ago that LeBron James and the Los Angeles Lakers were celebrating their 2020 NBA Championship, it isn’t your imagination. Last season ended 10 weeks ago, and the league has geared up again just in time to treat fans to a full slate of games today.

Betting on the NBA’s Christmas Day games has become a holiday tradition, first catching fire in the late 1970s and early 1980s when a few highly competitive contests finally drew the attention of the nation.

The league typically features their top teams and talent for their nationally televised Xmas basketball games, and this year is no different. The same can be said for the NBA betting options that are being offered at online sportsbooks, as these spreads are sure to take in a lot of action over the entire holiday.

The NFL doesn’t host games on December 25th every year, but it does happen frequently enough to expect a game if Christmas falls on a day that is reasonably close to the weekend without disrupting any other major sporting events.

The beauty of this Christmas Day game between the New Orleans Saints and the Minnesota Vikings is that it not only features intriguing NFL betting odds, but the result will also factor into current playoff scenarios.

If the season ended today, the Saints would be the #2 seed in the NFC and would host a wild card weekend playoff game against the Arizona Cardinals.

The Cardinals have some tough sledding ahead if they intend to stave off Minnesota and their playoff aspirations, as their final two games are against the San Francisco 49ers and the Los Angeles Rams.

New Orleans is still clinging to slim odds of reacquiring their status as the number one seed in the NFC, but with only two games to go, and currently sitting one game behind the Green Bay Packers, the outlook of that occurrence is murky.

What’s not so glum is the abundance of Christmas betting action at offshore sportsbook sites, so after you unwrap your presents, treat yourself to the gift of a large cash payday, or several large paydays, on these NFL and NBA odds.