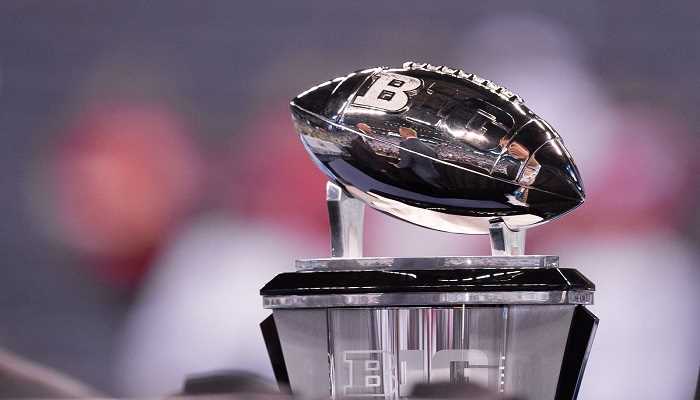 While the rankings have primarily been dominated by a slew of undefeated teams from the SEC, ACC, and Big Ten, a handful of worthy opponents are knocking at the door in the last chance to impress.

College football this year has been nothing short of wild. The Oregon Ducks are playing for a Pac-12 championship despite not winning the division. Ohio State didn’t play enough games to qualify for its title match, but that’s not stopping them.

And the big players, Clemson and Notre Dame, are set to face off in a highly anticipated rematch. The ACC gave them an extra week of preparation, and despite some rules being broken, NCAAF fans and NCAAF betting fans are looking forward to an all too enticing championship weekend.

Here at Sportsbetting.legal, we break down the biggest moneylines from our top-rated online sportsbooks ahead of all the action and give you our take on where we’re putting our money.

Northwestern is featured as heavy underdogs in this fight. While Northwestern finished last in the Big Ten West last year, it has outperformed expectations in 2020. The Wildcat’s defense paved their way to a 6-1 run outscoring opponents by a 177-102 margin, touting big wins over the likes of Iowa and Wisconsin.

The Ohio State Buckeyes are undoubtedly one of the best collegiate football teams in the nation and are looking for a shot in the Big Four. This will be the weekend’s biggest upset if Northwestern can come up with a longshot underdog victory.

The two teams both faced Michigan this season. Northwestern narrowly won 29-20 while the Buckeyes crushed Michigan 52-12. If this game is any indication of their match this weekend, we can expect an Ohio State victory. This line is too risky for us to go underdog pick here.

Both these teams got off to shaky starts in their seasons but have since made head-turning comebacks. The Sooners made a six-game winning comeback after a 1-2 season, including a loss to the Cyclones early in October. Taking the cover on Oklahoma may not be a bad idea on this bet as they will look to make a statement this weekend after their blemish against Iowa.

Oklahoma was without star RB Rhamondre Stevenson and dominant DE Ronnie Perkins when these teams first faced off. Their presence may likely be critical factors in the Sooners taking a victory. But the Cyclones haven’t won a football championship in over 100 years, and in their first appearance in the Big 12 championship, the pressure will be on to perform.

This may make an exciting underdog pick, but our money is on Oklahoma.

This game may very well decide the next Heisman Trophy winner. This line was much more enticing before Florida’s loss to LSU last weekend, which may be a big confidence breakdown heading into a matchup against an explosive Alabama offense.

Florida’s defense is ranked 50th in the number of yards allowed per play, and the big question remains at how the team will rebound from their 37-34 loss against Louisiana. Even with Kyle Trask leading the Gators to break a single-season school TD record, it may not be enough against Alabama’s Heisman contending WR DeVonta Smith.

The game will most likely be high scoring, so we expect to take the over on Alabama and take Alabama on the straight outright winner.

This game is expected to be a tough matchup, with QB Tyler Shough leading the PAC-12 in passer rating and going toe to toe with USC’s heavy pass offense. USC cornerback Olaijah Griffin has been one of the PAC-12’s top lockdown corners, and he is expected to be crucial to shutting down the Shough and the Oregon offense.

USC has had a good season, rebounding with multiple fourth-quarter comebacks proving their offensive explosiveness while under pressure. The Ducks have a pass defense that ranks in the bottom half of the country, hurting their chances of coming away from this game with a victory.

USC head coach Clay Helton has his eye on the PAC-12 crown, and a homerun season, we won’t bite on the Oregon lines for this game.

Ok, so this is the one we know you all have been waiting for, and after an exciting Clemson vs. Notre Dame bout earlier in the season, this line has gotten lots of attention both in the media and on the moneylines.

The Tigers are 6-1 overall in the ACC title games, winning five straight. The Fighting Irish are playing their first ACC title after joining the conference before starting the 2020 NCAA season due to the coronavirus. The 2021 season may look completely different, so this may be the only opportunity viewers get to see these two dominant teams go head-to-head in an ACC Championship.

All-star QB Trevor Lawrence had to sit out in the last game against Notre Dame due to contracting coronavirus, ending in a 47-40 OT loss. He will likely be wanting to show out in this rematch to show the Fighting Irish to reclaim Clemson’s honor from their otherwise undefeated season. The Tigers’ struggled after defensive injuries, but the full squad is now healthy and ready to face Notre Dame.

Notre Dame, on the other hand, is coming off an undefeated season. Ian Book has had a spectacular season with the help of an offense chock-full of unsung heroes. RB Kyren Williams has had a great season, too (1,011 total yards and 13 TDs).

When the two teams first faced off, Williams was 11-11 on blitz pickups, giving Book ample opportunities to move out the pocket and make big plays. With Clemson’s interior o-line having issues recently, this could be instrumental in a Fighting Irish win.

Clemson is favored to win. The winner will most likely be decided by who gives that extra 101%, and with Clemson’s reputation and a Big Four spot on the line, it may Lawrence and the Tigers who take the game. If the game is close, Notre Dame will still most likely get a playoff berth.

This game could go either way, Notre Dame could make an excellent underdog pick, but it may just be too risky with Lawrence back as QB and a healthy defensive line.