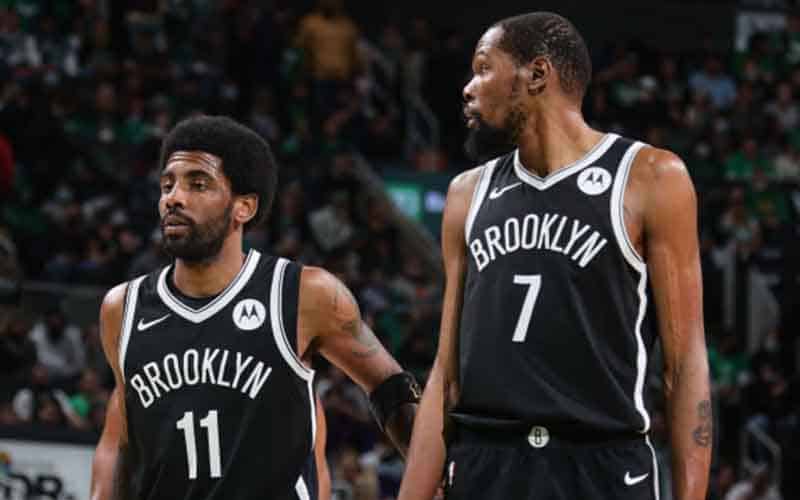 The NBA Playoff picture odds have been updated and the 2022 Finals are projected to be a matchup between the Pheonix Suns and the Brooklyn Nets.

The Suns are the first team in the NBA to clinch a playoff berth and appear to be headed toward a collision course with the Golden State Warriors in the Western Conference Finals.

The Eastern Conference bracket is a little murkier, as the futures odds for NBA Playoff betting suggest that the Brooklyn Nets will carve their way through the postseason and make it to the Finals despite being ranked 8th at the moment.

That scenario is nothing new. The Nets have been atop the NBA odds for the East all season, but it made a lot more sense while James Harden was still a part of their roster.

The James Harden trade to the Philadelphia 76ers broke up the “big three” for the Nets, leaving Kyrie Irving and Kevin Durant to make a run for a title with a new combination of players.

What’s strange is, Harden seemed to be the only player of the big three that was routinely playing games. KD’s playing time this season has been sparse early on as he’s been dealing with an MCL sprain.

Irving has been unable to suit up for home games in Brooklyn because of New York City’s vaccination mandate, however, the recent lifting of those requirements has Kyrie once again playing full time.

Harden’s arrival in Philadelphia has also changed their NBA betting fortunes a bit, as the 76ers are have held the 2nd or 3rd seed overall in the Eastern Conference since he’s been a member of the team.

Depending on how the final seeding plays out in the East, the Nets and 76ers could end up facing each other in the early rounds of the 2022 NBA Playoffs where who got the better of the deal can be decided on the court.

Will The Nets Make The NBA Finals?

Even with Brooklyn’s two studs healthy and playing, with the current seeding, the Nets would have will have to beat the Miami Heat, the defending NBA Champion Milwaukee Bucks, and possibly the 76ers en route to the 2022 Finals.

Oddsmakers likely expect the Nets’ placement in the standings to improve drastically over the final weeks now that Durant and Irving are starting, creating an easier path to a championship in the playoffs.

NBA betting sites offered a similar projected path for the Los Angeles Lakers last season as they also anticipated that the roster would return to full health and begin to gel on the court.

That never happened for the 2021 LA Lakers as they were ousted in the play-in games and didn’t make the cut for the final 16 teams. Some degree of certainty can be applied to Brooklyn’s playoff chances in 2022, but betting on them to reach the NBA Finals at this juncture comes with significant risk.

Confident gamblers that have faith in the Nets should wager now because their moneyline odds will shift and become less profitable if their record improves.