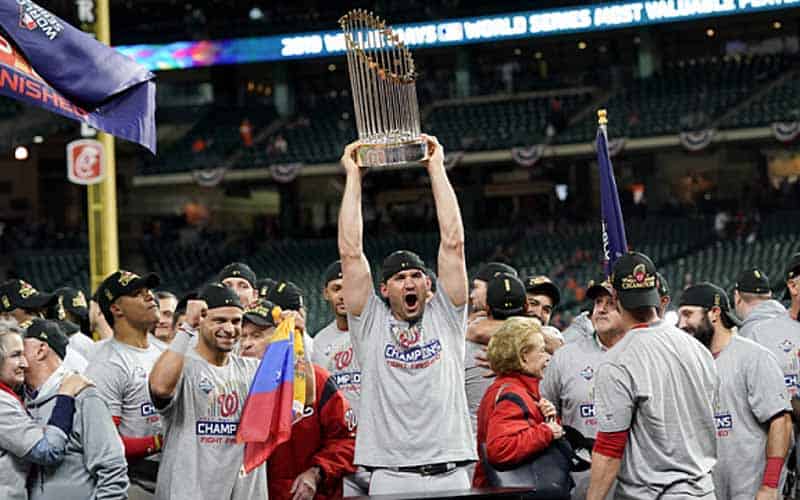 When the Washington Nationals woke up this morning, they realized it was not a trick; the team treated themselves to the 2019 World Series title over the favored Houston Astros.

Sadly for the ‘Stros, however, this loss will haunt them for many days to come.

Despite entering the game as odds-on favorites with -132 chances of winning Game 7, Houston could not seal the deal against the Nats.

Houston got out to an early lead at home, scoring runs in the second and fifth innings to go up 2-0 before the start of the seventh inning. That’s when everything changed.

Zack Greinke was nearly unhittable through the first six innings. However, Houston’s lead was cut to 2-1 after Anthony Rendon’s solo homer in the top of the seventh.

“We didn’t hit the ball hard until Rendon’s home run,” Washington hitting coach Kevin Long said. “That’s how dominating [Greinke] was. Those middle innings, he just rolled through us.”

After walking Juan Soto immediately after the Rendon homerun, Astros manager A.J. Hinch pulled Greinke in favor of Will Harris.

On just the second pitch, Howie Kendrick homered off Harris, giving Washington the 3-2 lead late in Game 7. The Nats would go on to score another run in the eighth inning and two more in the ninth to finish the game 6-2 over Houston.

The Nationals are going to revel in this World Series victory, the first for the franchise, for a long time. The MLB betting odds, though, are ready for next season already.

Bovada has released its 2020 World Series predictions, listing the Astros as co-favorites next season with +600 odds. The New York Yankees share the top spot with Houston.

The Nationals have +1500 odds to repeat in 2020, which equates to a 6.67% chance. But I doubt Washington cares; at the beginning of the 2019 MLB playoffs one month ago, the Nats only had +1500 odds of winning the World Series and look at them now.