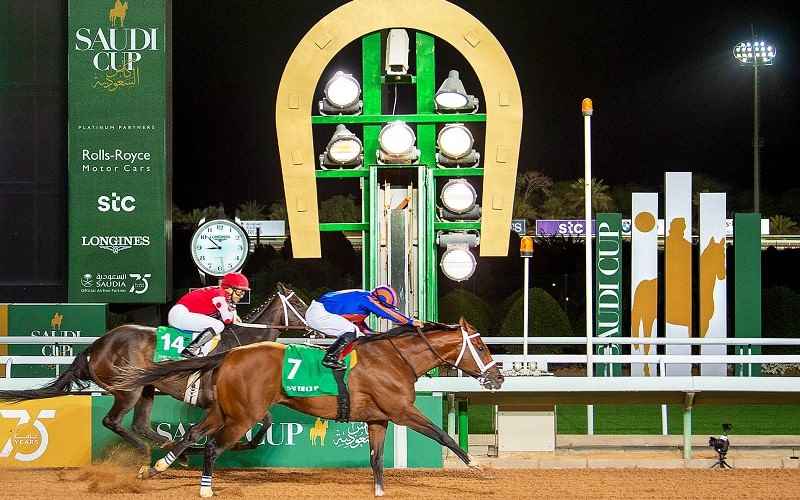 In an alternate universe, Maximum Security could have been one of the most famous race horses of all time.

The three-year-old Thoroughbred won last year’s Kentucky Derby and was the betting favorite to win the 2019 Triple Crown on most horse racing futures boards.

Unfortunately, though he managed to win the 2019 Kentucky Derby convincingly despite the track’s sloppy conditions, Maximum Security was flagged for interference and became the first ever horse to be DQ’d from the Derby for an in-race infraction.

Owner Gary West challenged the ruling repeatedly, eventually suing to have the original results restored. However, the disqualification stood, and West pulled Maximum Security out of the remaining Triple Crown races.

For the next several months, Maximum Security suffered from diminished performance and was scratched from several races to due to large colon nephrosplenic entrapment and colic.

This caused Maximum Security to miss the 2019 Breeders’ Cup, and he raced at sub-par levels in his ensuing comeback trials, despite winning these races.

Maximum Security was then scratched from the 2020 Pegasus World Cup in January due to an insufficient purse size.

The contest, hyped as the richest in Thoroughbred racing history with a purse of $20 million, took place on February 29, 2020, with Maximum Security winning by three quarters of a length ahead of Midnight Bisou, a four-year-old filly.

Or, possibly, nothing at all.

While Maximum Security passed all pre- and post-race tests for banned substances and performance-enhancing drugs (PEDs), due to Servis’ arrest, the Jockey Club of Saudi Arabia (JCSA) is withholding all of Maximum Security’s winnings until the doping case is resolved.

“JCSA is conducting its own investigation in respect of the allegations and until that investigation is concluded, JCSA will withhold payment of prize money due to all connections of horses placed in prize-winning positions in the Saudi Cup.

Due to the difficult operational circumstances caused by the Covid-19 global pandemic, the investigation has not yet concluded.

JCSA will issue no further statement until such time as the investigation is completed to our satisfaction.”

If Servis is found to have serviced Maximum Security with PEDs at any point within six months of the Saudi Cup, the horse will receive an automatic disqualification and no prize winnings will be forthcoming.

Servis is one of 27 individuals arrested in the wide-sweeping scheme, and each suspect has been indicted by the DA for the Southern District of New York.

Maximum Security, meanwhile, has been moved to the stables of Bob Baffert, considered by many to be the top Thoroughbred trainer in the world.

As for the community’s reactions to these events, debate is raging on both sides of the issue.

Many horse racing betting enthusiasts are calling Servis’ persecution tainted by an over-eager US law enforcement apparatus, pointing to the scheduling of various drugs approved in the United States for horse racing, while also pointing to the fact that several of the banned substances alleged to have been administered to horses in Servis’ care were only banned in late 2019, complicating the six-month testing window.

In essence, the argument is that Maximum Security may have been given legal drugs that were later outlawed.

This would cause the horse to test positive for PEDs without ever receiving them when they were actually classified as such.

Of course, detractors claim that Maximum Security’s sudden surge at the Saudi Cup is extremely suspect given his performance in races just preceding the major meet.

Additionally, Saudi Arabia’s horse racing rules bar many substances approved in other nations, including the United States, which further complicates things re the ethics of Servis’ conduct.

A simple oversight – or unfamiliarity with the laws that govern horse racing in Saudi Arabia – could be the chief culprit in the horse’s potential disqualification.

On top of all that, there are murmurings that Maximum Security – should Servis be found guilty of administering the drugs in question (namely SGF-1000, which increases stamina and endurance) – could be stripped of his status as the 2019 Eclipse Award winner as the American Champion Three-Year-Old Male Horse.

Despite all this, Maximum Security, now four years old, is continuing his career, having most recently won the San Diego Handicap (grade II) on July 25.

Further, owner Gary West is intent on continuing to enter the pony in competition throughout his four-year-old year, and his move to Baffert’s stables only reinforces that decision.

For horse bettors, their winnings on Maximum Security’s Saudi Cup performances and other races are not at risk, as these have already been paid out.

However, going forward, there is a decided cloud over Maximum Security – one that is far bigger than his faux pas in the Kentucky Derby, and question marks about the horse’s doping history might cause future payouts to be contingent on extended post-race drug testing.

Nevertheless, in whatever race Maximum Security enters from here on out, he will likely be favored until he’s put to stud.

Still, when wagering on Maximum Security at international sportsbooks with horse racing odds, we recommend familiarizing yourself with any caveats or special rules that might be attached.

A win at the Del Mar Racetrack will earn Maximum Security an automatic berth in the 2020 Breeder’s Cup Classic on November 7.

How the developments in the Servis case could affect such a berth – if Maximum Security wins tomorrow as expected – remains to be seen.

With nine wins, one second-place finish, and the historic Derby disqualification comprising Maximum Security’s 11 races to date, the horse may not be in the discussion for GOAT, but his career arc is starting to resemble that of Lance Armstrong’s: The horse could go from hero to zero at any moment now.

So you better bet while the betting’s good.