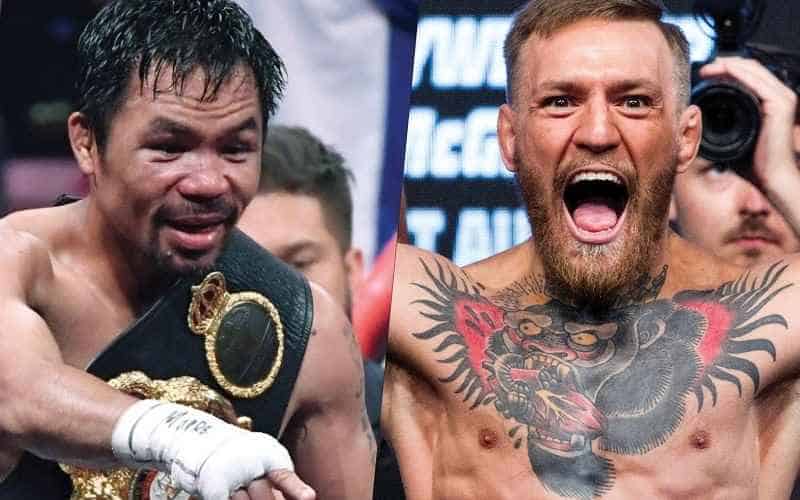 On Saturday, with one exasperated, innocuous tweet, Conor McGregor – MMA’s most quotable firebrand – did what he always does and set the sports world ablaze.

Expressing displeasure with various behind-the-scenes hurdles in setting up a blockbuster UFC bout, McGregor bailed on the promotion (for now), informing the world that he and boxing legend Manny Pacquiao would be fighting one another in the boxing ring in 2021.

Anyway all water under the bridge who gives a fook.
I’m boxing Manny Pacquiao next in the Middle East.

Of course, most industry analysts were quick to dismiss McGregor’s showmanship as exactly that, claiming that the fight would never happen.

When they finally got around to doing that, they found the PacMan in the gym, already preparing for the forthcoming contest.

Naturally, so are oddsmakers at the best legal online sportsbooks:

Of course, for Philippines sports betting fanatics, this is the biggest news in the nation. Pacquaio, a mythical figure of enormous status and reverence in his home country – and a popular Senator, besides – is larger than life.

And for the Philippines, this fight promises to be just as big.

For the rest of the world, the bout might be a harder sell.

McGregor’s megahyped megafight with Floyd Mayweather, Jr., in 2017 was a PPV record-breaker, but it didn’t exactly thrill audiences.

While the Irishman came away with a reported $130 million (compared to Money Mayweather’s $280 million payday), he might not make that much this time around, even with the purse split more favorably than the 70-30 he accepted from Mayweather.

Still, regardless of PPV buys (which could actually see something of a boost given 2020’s wide-ranging coronavirus lockdowns at sports arenas and a low return to typical gate numbers for the foreseeable future), if the fight does even half of the 4.3 million domestic buys and 800K+ UK buys that the Mayweather-McGregor exhibition pulled in, it should be a winner for all parties involved.

In the Philippines alone, remember, there are over 105 million people, and this fight will certainly generate an order of magnitude more interest there than the previous McGregor expo did. Sure, the PPV fees will be significantly lower there, but millions of additional viewers adds up.

The details of the McGregor-Pacquiao fight – including the venue, purse ratio, PPV terms, and other salient points of interest – still have to be worked out, and it’s important to note that this fight is not yet official.

Nothing the UFC can offer McGregor can remotely top even the worst case scenario in terms of financial gain for this bout, and it’s not unlikely that he’ll earn another nine figures for his 36 or so minutes in the squared circle.

For Pacquiao, the fight is about more than just the money.

While that’s important for the eight-division world champion, the Philippine pugilist and statesman is more concerned with using his earnings for coronavirus relief.

The pandemic has wreaked havoc on the islands, and while they haven’t seen as significant a death rate as many other regions due to COVID-19, the Metro Manila lockdowns – in effect since March – have cost the country billions of dollars and cost its people millions of jobs.

Pacquaio intends to donate a large portion of his haul to the islands’ relief efforts, according to spokesman Jayke Joson:

“For the sake of all the Filipino COVID-19 victims, Senator Manny Pacquiao will be fighting UFC superstar Conor McGregor next year. A huge portion of his earnings will proceed to those who are affected nationwide by the pandemic.”

All that said, nobody expects this to be a real fight.

McGregor, as the world saw in 2017, is no boxer by professional boxing standards, and Mayweather could have floored him at any time (and time again).

This fight should offer more of the same, with a lightning-quick Pacquiao letting the fight go – and letting McGregor’s hands fly – while dancing laps around him. A late-round TKO is likely, but the fight will end whenever PacMan wants it to.

Nevertheless, McGregor is strong and resilient, and like anyone else who steps under the ropes and onto the canvas, he has a puncher’s chance.

Indeed, McGregor’s fans called the prospect of a devastating knockout of Pacquiao “too easy” in one enthusiastic photoshop mockup, but the fight likely won’t be. Not if McGregor actually intends to win.

Easy money, yes. Easy victory? Not so much.

Of course, as sports bettors, easy money is what we’re after, too.

And given the odds on this fight, you can probably make some – especially at Bovada – if you act fast.

Most legal boxing betting sites have the odds heavily in Pacquiao’s favor, and while the lines at Bovada currently offer the best value by far, these are likely to move in the direction of consensus in a hurry.

If you want to maximize your payout on Pacquiao, bet at Bovada ASAP. Otherwise, you should sit back and let McGregor’s odds lengthen into “bolivian,” because that’s where they’re going to end up.