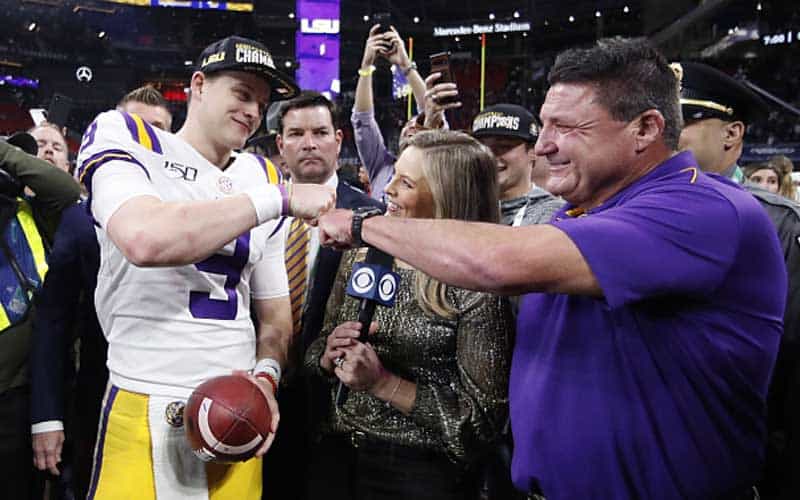 If Saturday were a movie, the Clemson-Ohio State game would have played out exactly the same with its memorable comebacks and high-stress moments. The Oklahoma-LSU game, on the other hand, probably would have looked a little different.

The first semifinal game of the 2020 College Football Playoffs was the Chick-fil-a Peach Bowl in Atlanta between the #1 LSU Tigers and #4 Oklahoma Sooners. The Tigers were only 14-point favorites– they ended up winning by 35.

After going up 49-14 in the first half, LSU finished the game with 63 points; Oklahoma was only able to notch 28. Oklahoma had the worst odds of winning the championship (+1000), but storybook endings love the underdogs. I guess the college football betting gods chose the Heisman Trophy winner instead.

Immediately after the LSU beatdown of Oklahoma on Saturday, Clemson battled Ohio State in the Playstation Fiesta Bowl in Glendale, Arizona. The defending champion Tigers went down 16-0 before pulling out two touchdowns to end the first half 16-14.

After scoring again in the third and fourth quarters, Clemson had the lead with 1:49 remaining. Ohio State was able to march up the field in the games final minutes, but QB Justin Fields threw a last-second interception to seal the Clemson win.

So, just like the betting odds predicted Friday, the National Championship game will be a matchup between two Tigers: LSU and Clemson.

The January 13 showdown will take place at the Mercedes-Benz Superdome in New Orleans, Lousiana– essentially making this a home game for LSU. The Bayou Bengals are 6.5 favorites over Clemson.

The money line gives Clemson +195 chances of beating LSU as the underdog, which equates to 31.86%. A Clemson win would make them the first team to ever repeat as CFP National Champions and the first back-to-back champions since the Alabama Crimson Tide in 2011 and 2012 under the former BCS National Championship.

LSU’s -235 odds favor these Tigers with a 68.14% chance of winning their first National Champion since 2007 when former head coach Les Miles led the team past Ohio State.

The full betting line is available below, including the over/under that is set at 69.5 points.