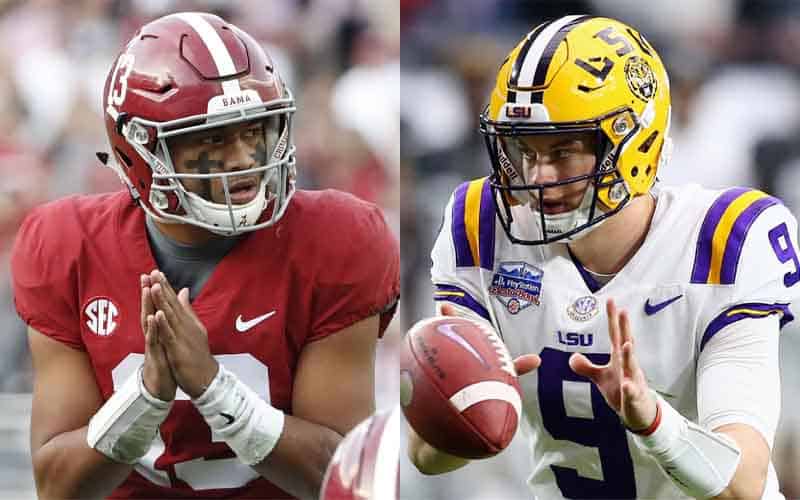 It’s rare for the top-ranked team in college football to enter a game as the six-point underdog.

But when the LSU Tigers rolls into Tuscaloosa to face the Alabama Crimson Tide this Saturday, the Bayou Bengals will be just that.

When the Preseason AP Top 25 was released, LSU was ranked #6 with Alabama taking the second spot behind Clemson. However, the Crimson Tide stole the #1 ranking from Clemson in Week 6 before giving it up to LSU in Week 10. All three have remained undefeated throughout the ranking carousel.

Now entering Week 11, #1 LSU takes on #2 Alabama. Ironically, the last time the two top-seeded teams in the nation faced each other in the regular season was a showdown between the same schools eight years ago.

As the college football betting odds sit right now, Alabama is a six-point favorite over LSU. Although the money line is still to-be-announced, the over/under is at 65 total points favoring the over at -115 odds.

There have only been six games since 1978 in which the AP #1 team was an underdog of a touchdown or more. However, if Alabama QB Tua Tagovailoa cannot play, the odds may shift in LSU’s favor.

During Alabama’s October 19 matchup against the Tennessee Volunteers, Tagovailoa suffered a high ankle sprain that required surgery. Subsequently, Tagovailoa missed the team’s next game against Arkansas.

According to head coach Nick Saban, Tagovailoa is a “game-time decision” for the Crimson Tide.

With the soon-to-be-released College Football Playoff rankings– the first set will be revealed on Tuesday– a loss for either one of these 8-0 squads may not be the end of their championship hopes.

Although neither team wants to lose a game during the season, a loss now would likely remove either LSU or Alabama from SEC title contention. While this sounds bad at first, this is just one less game for the team to have to play and risk losing.

With this loss on their resume, but a final 11-1 record, either team could come into the CFP Selection Sunday looking as strong as ever with nothing but fresh wins.