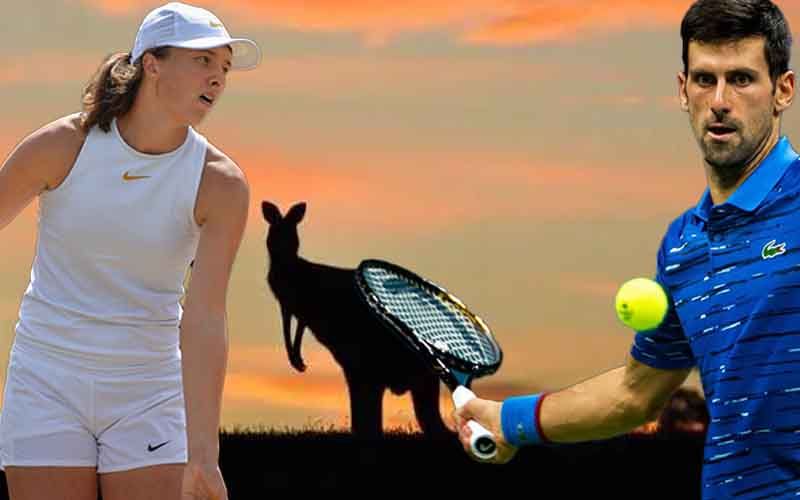 For late-night tennis bettors in the United States, the Australian Open Tournament is a blessing due to the enormous continental time difference.

The opening round of the 2023 Australian Open begins tonight at 7:00 PM, with the final matches of the day (night) starting at 11:30 PM on the ESPN family of networks.

The odds leaders at legal tennis betting sites are Novak Djokovic for the men and Iga Swiatek for the women. Here are the current Australian Open futures for the men and women that are posted at Bovada Sportsbook right now.

Djokovic has won the Australian Open nine times, more than any other player in the history of the tournament. That’s why his moneyline odds are in the negative, something that is normally unheard of when betting on a field of 128 players.

Novak has won 21 tennis grand slam tournaments during his illustrious career, and if he wins the 2023 Australian Open like he’s favored to do, he’ll pull into a two-way tie with his arch-rival, Rafael Nadal.

The tennis betting sites that populate our list of legal online sportsbook reviews place Nadal as the sixth most likely winner with a moneyline of +1600.

Nadal was the winner of the 2022 Aussie Open, but it must be noted that Djokovic was denied entry into the country due to COVID-19 restrictions.  One dollar bets made on Nadal’s odds to win will result in net gains of $16 if he hoists the third Australian Open trophy of his career.

Ashleigh Barty was the women’s winner in 2022, but she has since retired from professional tennis, thus guaranteeing a new champion this year.

Swiatek’s +225 moneyline odds to win are more in line with what a favored player would normally garner among such a large field of competitors. Still, tennis gamblers can more than double their money by wagering on the prospect of a 2023 Australian Open title for Iga Swiatek.

Since Iga’s 2016 debut as a professional, she has won three grand slam championships – the 2020 and 2022 French Open and the 2022 US Open. A win in the outback would place her three-quarters of the way toward a career grand slam, a feat that only ten other women have accomplished.

Along with the current tennis futures, there are also betting lines for every match occurring in the 2023 Australian Open.

Early odds for betting on Wimbledon, the French Open, and US Open winners are already on the boards and taking action at the online sportsbook sites we recommend here. Just be mindful that these grand slam tournaments don’t begin for several weeks and will take some time before payouts can be earned.