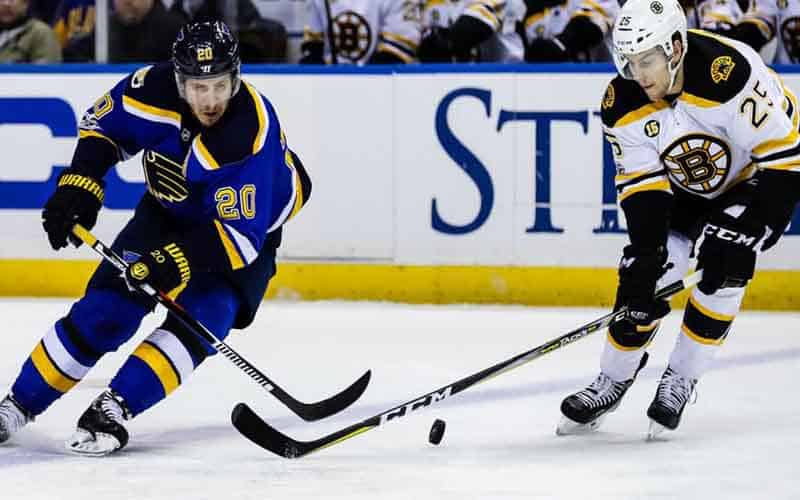 The 2019 Stanley Cup Final is now set, and the Boston Bruins have opened as the favorites — by a small margin — over the St. Lous Blues to win the series and earn the right to lift Lord Stanley’s Cup.

The Bruins were listed at -150 (58.26% chance to win) when the betting line was first posted, and the public money has pushed their odds just 15-20 points further in their favor depending on the online sportsbook.

After sweeping the Carolina Hurricanes in the Eastern Conference Final, the Bruins will have 10 days to rest up before the Original Six member goes for the 7th Stanley Cup championship in franchise history and first since 2011.

On the other end of the ice, the Blues won 5-1 over the San Jose Sharks last night in Game 6 of the Western Conference Final and opened as the underdog at +130 (41.74% chance to win), which have dipped slightly due to more public money coming in on the favorite.

But playing as the underdog is nothing new for the Blues because if the 2018-19 NHL season taught us anything, it’s that there are long shots, and then there are the Blues.

However, while the Bruins finished tied for the second-most points in the standings, many people thought the Blues were the worst hockey team in the NHL just a few months ago.

On New Year’s Day, fans in St. Louis had started to play the blues, which was understandable. After all, the Blues had 34 points in the standings, which was tied with the Ottawa Senators for dead last in the NHL.

Even worse, the betting odds for the Blues had hit rock bottom, who was listed on Jan. 1 at +25000 (250-1), which gave them less than a half-percent chance to win the Stanley Cup.

And it looks like at least one Blues fan was a believer. According to ESPN, Scott Berry, a casual sports bettor and St. Louis native, placed a $400 bet on the St. Louis Blues at the beginning of 2019 to win it all at 250-1 at Caesars sportsbook in Las Vegas.

The Bruins have home-ice advantage for the best-of-seven series, and the puck is set to drop for Game 1 at 8 p.m. ET Monday night at TD Garden in Boston.

Below is you can find the puck line, money line, and total (over/under), and a complete schedule for the 2019 Stanley Cup Final between the Bruins and the Blues.