2019 SEC Preview: Alabama favored to roll through the conference once again 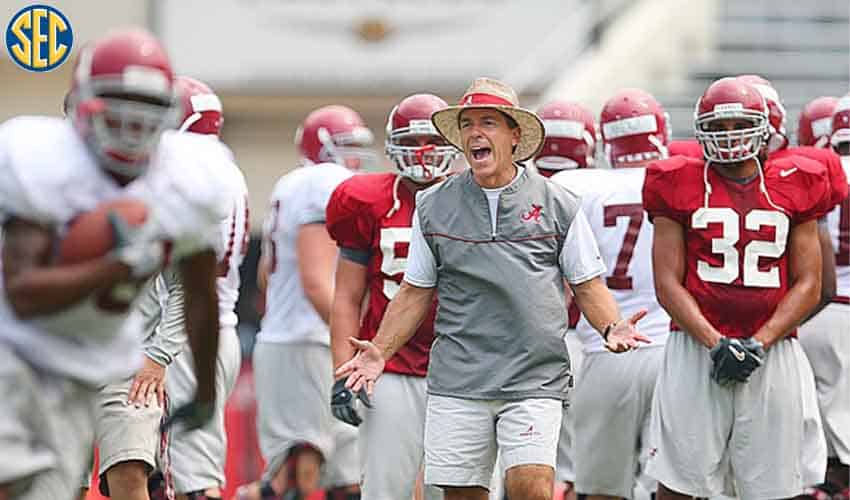 Another year, another SEC title for Alabama — according to oddsmakers, at least.

The Crimson Tide are predicted to once again roll through the Southeastern Conference, swallowing up the field and squeezing the life out of every team in their wake while they claim yet another SEC championship and another trip to the College Football Playoff. That’s what red tides do.

And clearly, the Tide is in.

That reality is reflected atop the SEC odds at MyBookie, where Alabama is trending at -150, solidly out in front of their only real competition in the Georgia Bulldogs (+250).

Despite the ignominy of laying an egg (but not a goose egg, at least) in the 2018 CFP National Championship, the Tide have been to that game four years in a row. And in those four years – in arguably the best run of head coach Nick Saban’s ridiculously accomplished career – the team only lost four games.

In his 11 years at Alabama, Saban has proven himself the ultimate power ranger, leading his squad to six SEC titles and five national championships. Under Saban, the Tide have held a number-one ranking in national polls for all or part of every season since 2008.

Bama also returns the core of what most analysts expect to be the top-rated defense in the NCAA, and they sport 2019’s top-ranked recruiting class.

But if any team can supplant the Tide in the SEC, it’s Georgia. The Bulldogs should have no problem chewing up the SEC East and earning a berth to the conference title game December 7 in Atlanta’s Mercedes-Benz Stadium.

That was the site of last season’s SEC title game, where the Bulldogs were in control against Alabama through the half and went into the fourth quarter leading 28-21. And then Jalen Hurts happened.

After the stunning SEC title loss, Georgia’s 2018 campaign ended in further disappointment, but the team went 11-3 overall and 7-1 in the SEC.

This season, they’re projected to be even better. Head Coach Kirby Smart looks poised to rocket through the ceiling of his Mark Richt-like trajectory, quarterback Jake Fromm is a bona fide Heisman contender (+1200), and RB D’Andre Swift, appropriately, is lined up right behind him (+1400).

Barring almost inconceivable disaster, the SEC champion should be one of these two clubs and a lock for the four-team CFP tournament.

Of course, intrigue for the SEC’s 2019 iteration is far from limited to the top two teams. And fans and bettors are just as interested in the rest of the pack.

The Florida Gators return streaky quarterback Felipe Franks, who played lights-out in the Gators’ last four games in 2018. If he can sustain the level of play that got his team to seventh in the AP Top 25 after crushing Michigan in the Peach Bowl, the Gators could prove a major SEC wildcard.

For the Auburn Tigers, despite a poor 2018 that saw them go 8-5 (3-5 in the SEC), hope springs eternal. That said, head coach Gus Malzahn is on the hot seat, and even his whopping $30 million buyout might not keep the War Eagle from flying the coop after another less-than-stellar campaign.

Texas A&M is trending positively, despite sporting +2500 odds to win the conference. The Jimbo Fisher-led team has one of the most difficult schedules in all of college football, however, so their role might be more “spoiler” than contender. While Aggies fans may wish for something more, most sports bettors are probably okay with this.

Kentucky surprised everyone last year, going 10-3 overall and 5-3 in conference play. The team lost a host of talent after that unexpected performance, and even the most die-hard Wildcats fans are skeptical of their chances to repeat such success. Still, any of the lower-ranked teams in the SEC could peel off a similar run.

To see where your favorite teams rank in the SEC conference championship odds, the current college football odds are available below: