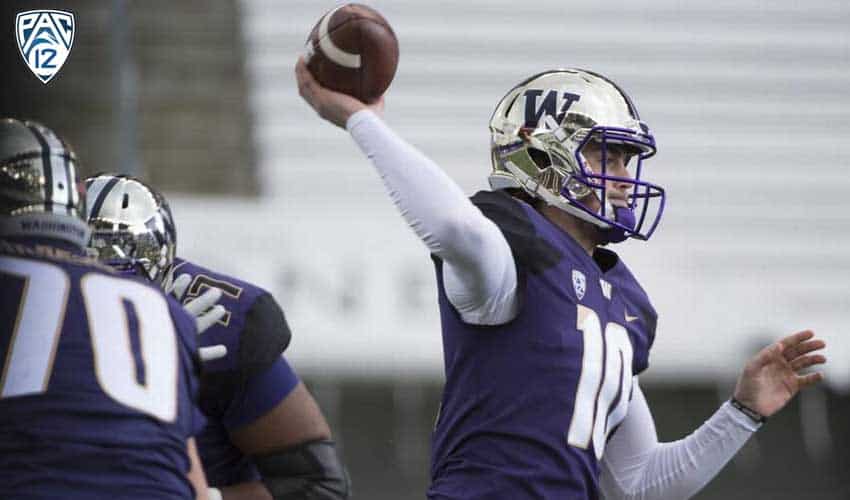 Even though the Northwest Border War between the Washington Huskies and the Oregon Ducks won’t be played until October 19, the battle has already begun at the top of the 2019 Pac-12 conference championship odds.

Currently, the two clubs are trending at a virtual dead heat at premium college football betting sites, with the Huskies listed as the favorite with +180 odds while the Ducks are nipping their heels at +200. The Utes are third on the boards at +550.

If the Pac-12 odds are anything to go by, Washington’s effort to repeat could come down to their midseason home matchup against Oregon, where the two teams will meet for the 112th time.

Oregon, coming off a 9-4 season (5-4 in the Pac-12), should be even better this year. Quarterback Justin Herbert – a projected top-10 pick in last year’s NFL Draft – opted to return for his senior season. The 6-foot-6 passer is a Heisman contender, and the team is bringing back 10 of the 11 starters on offense.

For Washington, the Ducks are clearly this year’s team to beat.

Last year, Washington won the Pac-12 title, going 7-2 in the conference (10-4 overall) and earning its spot in the championship by beating the Washington State Cougars in a thrilling Week 13 win-and-you’re-in finale.

The Cougars, who went into the aforesaid 2018 Week 13 “tie-breaker” one game ahead of the Huskies in the Pac-12 standings, are sitting at +700. USC, a perennial conference contender, is at +800.

While currently pulling odds of +3300 to win the Pac-12, UCLA is coming into the 2019 season with a major chip on its shoulder: head coach Chip Kelly. After years of disappointment, the Bruins enlisted the former Oregon offensive guru last year to get them over the hump.

But in his first season, that hump was more of a speed bump (or, really, a brick wall), with Kelly leading the club to its worst showing in 47 years, going 3-6 in Pac-12 play and 3-9 overall.

Oddly enough, the Bruins scored a major upset last season against USC, beating the Trojans 34-27 in Week 12 to take home the Victory Bell after a three-year losing streak.

Still, USC is projected to bounce back strongly from its underwhelming 5-7 campaign (4-5 in the Pac-12). If they don’t, head coach Clay Helton could find himself spending bowl season looking for new employment.

Other storylines of interest heading into the 2019 Pac-12 campaign include Utah bringing back 15 starters, which could push them over the edge. The Utes have been right on the cusp of late, winning at least nine games in four of the last five seasons.

At Colorado, new head coach Mel Tucker is expected to make the team competitive, while Kevin Sumlin is primed to make gains in his second year helming Arizona. And, of course, Arizona State’s Herm Edwards is looking to improve on last year’s 5-4 record in his sophomore season with the team.

Even though there is plenty of intrigue and a host of major rivalries to keep fans and bettors happy, the Pac-12’s biggest issue for 2019 could be its search for relevance at the national level.

The Pac-12 hasn’t fielded a College Football Playoff team in two years, and since the playoff format was implemented for the 2014 season, only two Pac-12 teams have been selected to the CFP.

Below, you can find the current Pac-12 conference odds for all of the teams heading into the 2019 season.