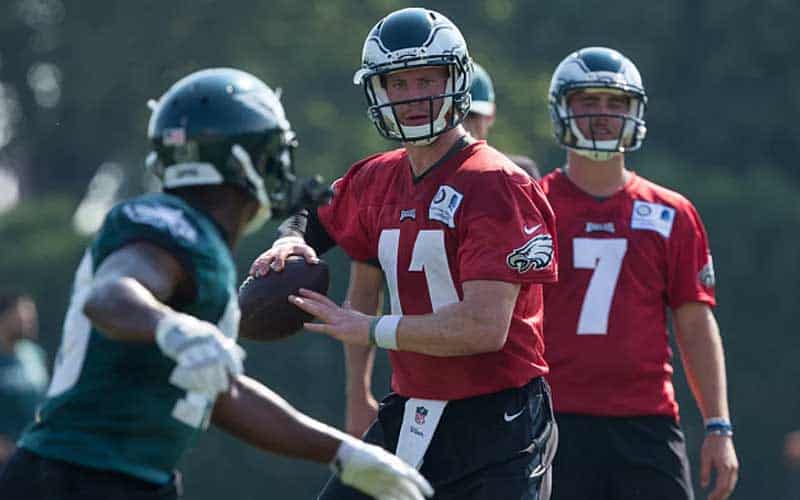 The NFC East looks to be a two-horse race between the Philadelphia Eagles and the Dallas Cowboys in 2019 with the Washington Redskins and New York Giants given longshot odds for this season.

The Eagles won Super Bowl LII less than 18 months ago under backup Nick Foles. Last season, franchise quarterback Carson Wentz went down with injury again after starting the first 11 games of the season for Philadelphia. Stepping in for the second straight season, Foles continued his heroics by beating the Chicago Bears in the playoffs before falling to the New Orleans Saints. Coming into 2019, Wentz is healthy and the team hopes to capitalize.

Another playoff team from last year is the division-rival Cowboys. Despite ongoing contract negotiations with offensive leaders QB Dak Prescott and RB Ezekiel Elliott, the Cowboys have the firepower necessary to fend off the favored Eagles atop the NFC East. And Dallas knows how to do it, too: Last season, the 10-win Cowboys were division champs and held off the Eagles to win the race.

To review the odds used for our 2019 NFL division previews, you can visit Bovada Sportsbook. For more information about betting on the National Football League, check out our NFL Betting Guide.

Wentz has had a number of injuries throughout his career, including tearing his ACL and LCL in 2017 and back spasms throughout the 2018 season. Before the 2019 offseason, Nick Foles offered the team a security blanket under center.

Now with Foles joining the Jacksonville Jaguars, the Eagles are relying solely on Wentz. The Eagles return record-breaking TE Zach Ertz and traded for WR DeSean Jackson, a player familiar with the team as he played in Philly from 2008-13, to alleviate some of the stress on Wentz.

The quarterback position is not the only spot on the field plagued by injury. On defense, the Eagles suffered injuries to S Rodney McLeod and CB Ronald Darby, affecting the team’s performance in the secondary. But coming into this season, the defense looks to be healthier for Philly. If the team can stay healthy throughout the season, the Eagles will hold onto their spot as the NFC East favorites.

Last season’s divisional champions have to make some money decisions soon because some of Dallas’s biggest names have sought contract extensions this offseason. Most importantly, Prescott is hoping to break the $30 million per annum mark. Currently, the franchise QB is set to make around $2 million in 2019.

Fellow offensive players RB Elliott, WR Amari Cooper, and OT La’el Collins are also seeking new contracts with the team. TE Jason Witten, who initially retired in 2018 but has since signed a new contract with Dallas, is set to resume his playing career with the team amongst the other question marks on offense.

Dallas players are not the only ones hoping for new contracts; coach Jason Garrett is in the same boat. The 2016 Coach of the Year is in the final year of his deal, but could literally be fighting for his job this season. The Cowboys went 10-6 last season where they defeated the Seattle Seahawks in the Wild Card game. If they can hold form this year, the Cowboys, along with the Eagles, have the best chance to take the top spot in the NFC East divisional race.

There’s a lot of questions surrounding the Redskins coming into 2019. One of the biggest is at quarterback. Veteran QB Alex Smith went down last season with a compound fracture, breaking his fibula and tibia. With such a severe injury, not only is 2019 unlikely for Smith, but his career could be over.

Enter 2019’s 15th overall pick: QB Dwayne Haskins. It is unclear when the first-rounder will get his opportunity, though. Behind career backups Colt McCoy and Case Keenum, Haskins could have trouble finding chances to start. However, depending on training camp performances, it’s possible that Haskins will start the 2019 season for Washington.

After going 7-9 last season, the team will need to address more than their quarterback choice. With a solid defense line spearheaded by Jonathan Allen, Daron Payne and Matt Ioannidis, the young core could ease the pressure on the offense, but even that won’t likely be enough to contend for the division’s top spot.

The biggest headline out of New York this offseason was the Odell Beckham Jr. trade to Cleveland. The team unloaded the controversial wide receiver in exchange for S Jabrill Peppers, G Kevin Zeitler, plus first- and third-round picks in 2019.

Another noteworthy storyline for New York revolves around the quarterback. The team retained Eli Manning while also drafting Daniel Jones with the sixth overall pick in 2019. New York isn’t giving any answers on when Jones will start, but with Manning’s poor play over the last couple years, it could be soon. Through all the turmoil on offense, New York still has RB Saquon Barkley. The 2018 Rookie of the Year and Pro Bowler amassed over 1,300 yards starting every game for the Giants, one constant the team needs to highlight in 2019.

Despite the roller coaster on offense, New York’s defense, particularly the d-line and secondary, could produce solid returns for the Giants. Dalvin Tomlinson, B.J. Hill, and rookie Dexter Lawrence look to create a young, dynamic force on the defensive line for New York. First-round pick Deandre Baker, coupled with newly-acquired Peppers and veteran Janoris Jenkins, highlight the secondary for the Giants. Other than those few bright spots, the Giants don’t appear to have much of a chance to win the division in 2019.