What If Coinbase Decides You Shouldn’t Bet On Sports? 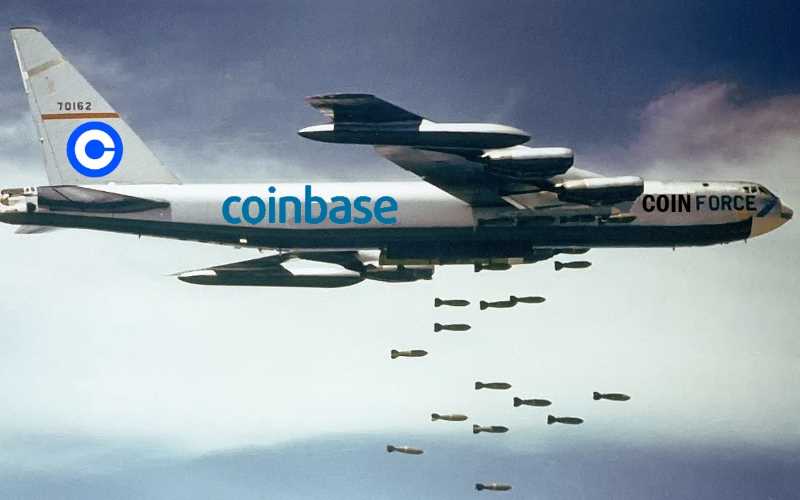 Crypto isn’t only the best way to fund your online sports betting (or frankly, your online anything else), it’s also functionally disconnected – or, at least, as disconnected as anything can be – from the old-money fiat structure of the world.

The powers that be be very powerful indeed, and they don’t like crypto one bit.

Of course, crypto isn’t truly decentralized. That’s because so much of its decentralization depends on the user and not just on the crypto’s technology itself.

That’s not to say that some cryptos – even some of the most popular ones, like Bitcoin (BTC) – aren’t centralized as a matter of necessity.

In the case of Bitcoin, for example, mining is so cost-prohibitive and energy intensive that most BTC blocks are processed by just half a dozen or so major server farms around the world.

That’s a problem – at least theoretically – that more modern cryptos – such as Cardano, Solana, Terra, Avalanche, Polkadot, and others are trying to solve (and, for what it’s worth, are largely succeeding).

Ethereum currently runs the risk of Bitcoin’s problematic centralization-past-the-point-of-no-return status, but the network’s transition from Proof-of-Work (PoW) to Proof-of-Stake (PoS) with Ethereum 2.0 should remedy that negative trend by the end of 2022 (or sometime in early 2023).

Without decentralized exchanges, your crypto is basically centralized by default.

And to be clear, none of the popular US exchanges are remotely decentralized.

Even LocalBitcoins, which used to allow users to buy BTC semi-anonymously by linking up private buyers and sellers, now requires KYC compliance for all users.

Now, there are proper decentralized exchanges out there. There are also ways to use VPNs in concert with these exchanges such that you reduce your unique signature when buying or trading your virtual assets.

There are even crypto “tumbling” services that allow you to decouple any personal associations with your crypto purchases and transactions.

But these are — in some places – questionably legal at best, and as with using the Monero crypto, the simple act of employing such services will invariably call your activities into question.

It’s like pleading the fifth: It’s not legally an admission of guilt (and in most cases is invoked by innocent parties who merely wish to maintain their privacy when faced with an unwanted or unjust public limelight), but it’s effectively an “admission of guilt.” Most Monero users simply value their privacy, but their privacy is smeared by bad actors who use the same crypto toward nefarious ends.

If you use a regulated exchange (which you probably do – and we do, too, given the sheer convenience of these services), you are potentially boxing yourself in.

If you haven’t been paying attention, the big world news trend has pivoted recently from COVID-19 (what’s that?) to Ukraine. Specifically, Russia’s alleged invasion thereof.

Naturally, the entire world – or, at least, its mass media – has seemingly decided that “Slava Ukraini” is the front runner for Webster’s 2022 Word of the Year (“vaccine” won in 2021 and “pandemic” won in 2020). Volodyamort Putler™ is Literally Trump™ now, and the Russians are getting canceled left and right.

And one of the outfits canceling Russia?

Cryptocurrency trading platform Coinbase Global Inc. said it blocked over 25,000 wallet addresses related to Russian individuals or entities that it believes to be engaging in illicit activity.

The blocked addresses represent about 0.2% of Coinbase’s 11.4 million monthly transacting users, based on 2021 data. In a company blog, Paul Grewal, Coinbase’s chief legal officer, said the largest U.S. crypto exchange has banned access for sanctioned individuals and is using blockchain analytics to identify addresses potentially linked to them, which it also adds to an internal blocklist.

“Today, Coinbase blocks over 25,000 addresses related to Russian individuals or entities we believe to be engaging in illicit activity, many of which we have identified through our own proactive investigations,” Grewal wrote. “We shared them with the government to further support sanctions enforcement.”

Whether you support Ukraine or Russia or are simply a passive observer of the world at large, this is not something anyone should accept.

See, Coinbase is actually policing its users and is blocking those it merely suspects – based on unpublished and undisclosed criteria – to be…what exactly? KGB agents? High-level authorities in the Russian Federation? S-s-s-spies? People on Twitter with conservative isolationist or Russian nationalistic opinions? Freedom Convoy truckers? Freedom Convoy donors?

Sure, Coinbase claims it isn’t going to institute a blanket ban on Russian users. At least, not right yet.

In a statement to Reuters, a Coinbase spokesperson qualified the company’s stance in a particularly troubling way (emphasis again added):

At this time, we will not institute a blanket ban on all Coinbase transactions involving Russian addresses.

We’ve said it many times before – practically on every crypto page among our online betting banking primers – but it bears repeating:

You should never keep your crypto on the exchange where you buy it unless you’re actively trading the stuff and taking particular financial advantage of the exchange platform. If you’re buying crypto to hold/invest or to use for purchasing goods or funding services online, your very first action should be to move your crypto off your exchange and into a private, non-custodial wallet.

No citizen of any nation wants to be punished – financially or otherwise – for the actions (or even the perceived actions) of a bunch of “their” government officials on the world stage.

Coinbase just set crypto back several years, and it’s up to the other big exchanges to resist this kind of outrageous overreach.

Don’t let these creeps scare you off getting started buying and betting with cryptocurrency. Just make sure you don’t let them “manage” your funds for you.