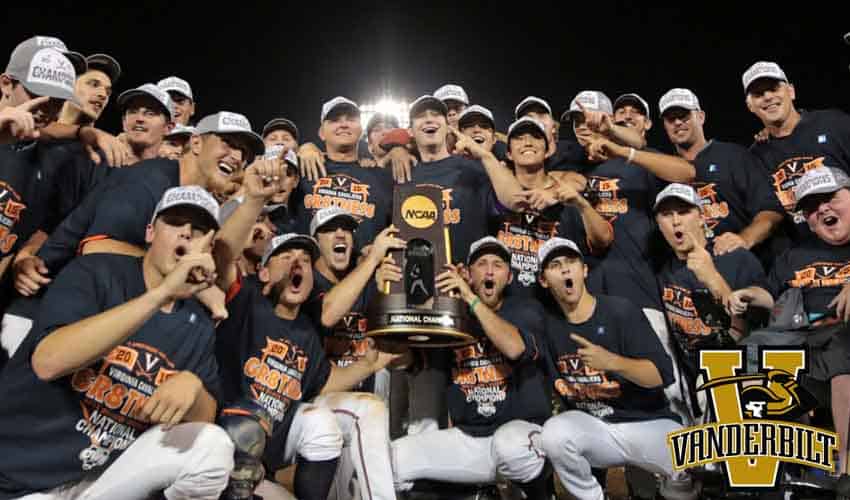 With a program built like a brick house, Vanderbilt won Game 3 of the 2019 College World Series, winning their second title since 2014.

Game 3 ended with an 8-2 victory for Vanderbilt, who dominated college baseball throughout the 2019 season, going 59-12 with the help of their 13 MLB draft picks.

The clock struck midnight on Michigan’s Cinderella title hopes. After upsetting Vanderbilt 7-4 in Game 1, the Wolverines failed to close out the series in either of the next two games.

Vanderbilt is no stranger to success. Since 2011, the Commodores have reached the CWS four times, winning the title in 2014.

The team also swept this year’s Southeastern Conference regular season and tournament titles prior to the start of the NCAA Tournament.

However, the team is no stranger to disaster either. In 2016, star freshman pitcher Donny Everett drowned during a fishing trip. Everett would have been a senior this year.

Following the final flyout by Michigan’s Ako Thomas, the team invited Everett’s parents to celebrate with the team at home plate.

Although Vanderbilt came into the tournament with a prolific offense, Coach Corbin believes it came down to his aces.

“In this tournament, it was starting pitching,” he said, referring to the dominance his team displayed on the mound.

Vanderbilt pitchers combined for a 2.50 ERA in the CWS, including a no-hitter from the CWS Most Outstanding Player, Kumar Rocker, in the super regionals.

Immediately following the Game 3 loss, Michigan coach Erik Bakich is hopeful for the future of Wolverines baseball and discussed the effects of reaching the CWS for the program.

“They have inspired future generations of Michigan baseball players with the belief that winning a national championship is possible,” he said his post-game interview with ESPN.

Unfortunately for the Wolverines, they just could not keep up with Vandy’s pitching and high-powered hitting in Games 2 and 3.

In the locker room following the Game 3 loss, Michigan pitcher Tommy Henry gave an emotional response to the team’s status as a Cinderella.

“We believe we belong here and knew we belonged here the whole time,” he told MLive after the game.

Michigan was one of the last four teams chosen to compete in the NCAA Tournament, yet still became the first Big Ten team to play for the championship since the 1966 Ohio State Buckeyes.

2020 College World Series odds are not yet available but look for Vanderbilt to enter next season as one of the favorites to win it all.