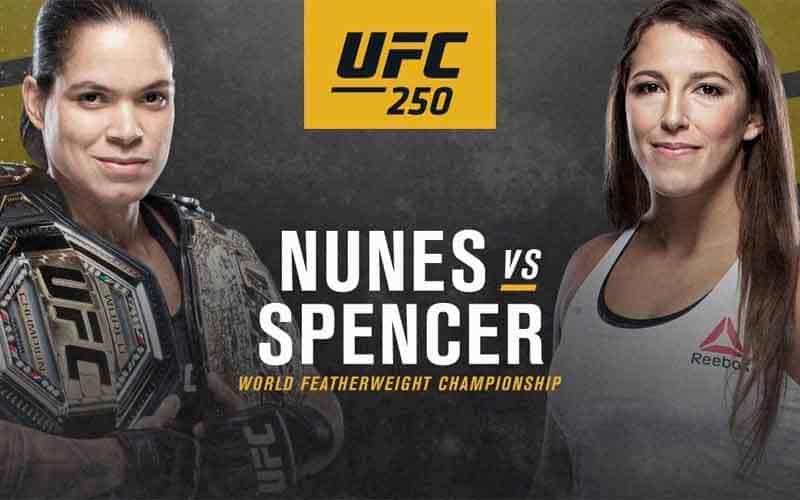 The Ultimate Fighting Championship and CEO Dana White continue to provide opportunities for legal sports betting during a time when professional sports are largely dormant.

Hot on the heels of last weekend’s UFC ESPN event, UFC 250 comes just seven days later and will be hosted at the promotion’s APEX training facility in Las Vegas, NV, with no ticket sales allowing for fans to attend, according to Sports Illustrated.

UFC 250 will be the fifth event the MMA promotion has held since the COVID-19 outbreak caused the stoppage of all mass gatherings. White, determined to continue to present UFC matches throughout the Coronavirus shut down, has explored every avenue to keep his ship afloat.

The following UFC 250 odds are provided by Bovada Sportsbook, though you are encouraged to shop lines between multiple books to find the best values for each bet you’d like to place on the highly anticipated event.

The main event on Saturday night pits women’s UFC Featherweight Champion Amanda Nunes against Felicia Spencer.  MMA fans that are eager to bet on the UFC have been anticipating this matchup for some time. Let’s have a look at how the two combatants compare on paper:

Nunes has the advantage in size and experience, and their ages are so close that it is not likely to factor into the fight. Spencer is a heavy underdog despite her impressive 8-1 record. A wager of $100 on Spencer to win would earn a payout of $425 if she can pull off the victory.

It seems clear that Nunes would be a favorite, but why are her odds for a victory at UFC 250 on Saturday night so astronomical?

Look no further than Spencer’s record. It is impressive and represents a great start to her career, and though the sole blemish came at the hands of Cris Cyborg via a judge’s decision after the completion of the fight’s three rounds, her limited body of work compared to Nunes’ makes bettors wary.

On the other hand, at UFC 232, Nunes destroyed Cyborg with a knockout just 51 seconds into round one. The two traded vicious blows, but ultimately, Nunes’ power and speed were too much for Cyborg to handle. Nunes also has a victory over Ronda Rousey, stopping her in the first round with a knockout in what would be her final MMA fight to date.

Below are the remaining odds for the main card on Saturday night. The line that jumps out to us the most is the one for Wineland vs. O’Malley. Despite a two-year layoff, Sean O’Malley enters the bout undefeated and is a huge favorite at -450 odds.

The big “if” is whether O’Malley can pick up where he left off after two suspensions for performance enhancing drugs (PEDs). If he can’t continue to add to his unblemished record, wagers on Wineland can pay off huge to the tune of 4.5X the amount risked. Regardless of the outcome, O’Malley vs. Wineland should be one of the most intriguing bouts of UFC 250.

In addition to the main card above, there are prelims, as well. The preliminary matches will begin at 6 PM and can be seen for free on ESPN prior to the start of the main card, which will occur on pay-per-view via ESPN+. Stay tuned to the latest developments in legal sports betting for more UFC odds and updates as they come in.