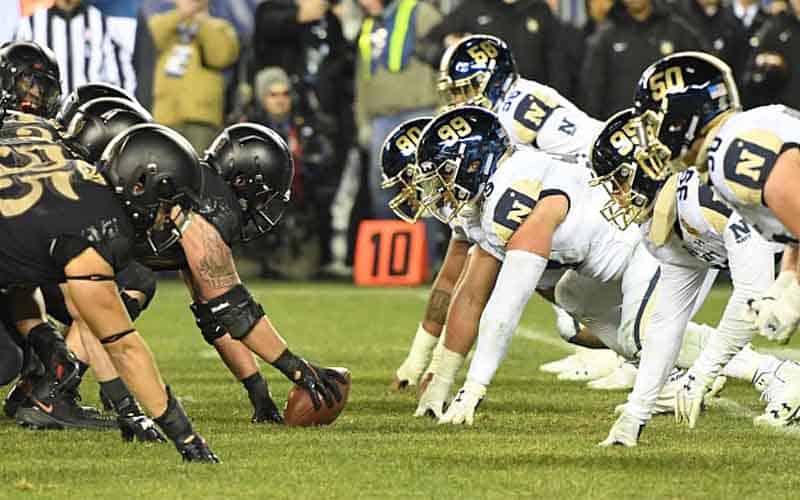 This Saturday marks the 120th meeting of America’s Game, the annual college football matchup between the Army Black Knights (5-7) and Navy Midshipmen (9-2). Despite Army’s current three-game winning streak since 2016, the Midshipmen lead the overall series 60-52-7.

For the 2019 game, Navy is favored to add its 61st win to the series this weekend.

The Midshipmen are currently ranked 23rd in the country and are 10.5 point favorites over the West Point Cadets. With their -460 college football betting odds, Navy has a 79.52% chance of winning compared to Army’s 20.48% (+330) chances.

Army’s rushing duo of QB Kelvin Hopkins and RB Connor Slomka account for 15 touchdowns and a combined 1,300 yards on the ground. Navy’s run defense, however, is ranked #17 in the country, which will likely pose a problem for the run-heavy Black Knights.

Not only can the Midshipmen stop the run, but they can also produce it. Navy is averaging over 360 rushing yards per game. If Army cannot stop the Navy’s run game as they have in recent years, the Midshipmen are likely capable of covering the spread easily.

The first meeting between the two meets took place on November 29, 1890 with Navy winning 24-0. The series also marked the first time a football helmet was used when Joseph Reeves used one in 1893. Instant replay was also used for the first time in an American football game during the 1963 showdown.

Honoring the history between the two teams, both Army and Navy will play homage to their service to the country this year.

Army’s uniforms honor the 1st Cavalry Division, an arms division that has served since World War II. Previous Division uniforms for Army include the 82nd Airborne in 2016, the 10th Mountain in 2017, and the 1st Infantry Division in 2018.

Navy, on the other hand, will play in throwback uniforms from the 1960s, the decade in which the team reached #2 in the nation with the help of Heisman winners Jim Bellino (1960) and Roger Staubach (1963).

@navyfb will wear these throwback uniforms from the 1960s for its big game against Army on Saturday.