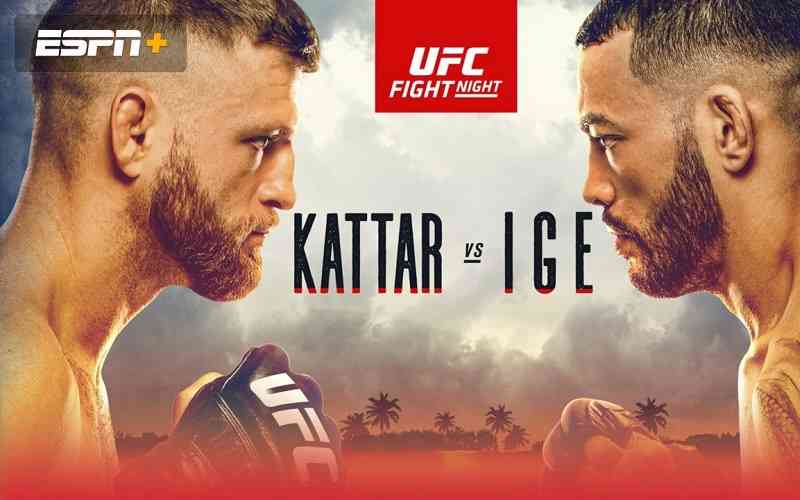 Wednesday night’s UFC Fight Night on ESPN is sure to excite those that enjoy betting on the UFC, as there are eleven matches on tap, with prelim bouts beginning at 7:00 PM EDT on ESPN and ESPN+.

The stacked card features a lightweight main event between Calvin Kattar and Dan Ige in what should prove to elevate the winner toward the top of the weight division.

Although Dan Ige has been on a tear, winning his last six Ultimate Fighting Championship fights, he is predicted to lose to heavy favorite Calvin Kattar.

Kattar is currently ranked sixth in UFC’s lightweight division, winning his most recent fight against Jeremy Stephens in the second round with a TKO. This will mark Kattar’s seventh fight in the UFC.

Although Kattar has improved his striking techniques, winning his last four matches via knockout, Dan Ige has never been knocked out in his career. Both of Ige’s losses have been by judge’s decision.

Ige is also on a hot streak, winning his last six fights, entering Wednesday’s fight as the tenth-ranked lightweight in the UFC.

To further breakdown the fight, let’s take a deep dive at how the competitors match up against each other, starting with the tale of the tape.

Kattar vs. Ige: Tale of the Tape

Kattar is proficient at striking, landing an average of 5.29 punches per minute, and winning 52% of matches by knockout or TKO. Throwing punches opens up a fighter’s body to strikes, and that is reflected by the 6.49 blows that Kattar absorbs per minute. These statistics reflect Kattar’s striking power, as typically, accepting more blows than one delivers is not a recipe for success in the Octagon.

Kattar has a slight advantage in reach, but it is his 4″ height superiority that will prove difficult for Ige to defend. Kattar will be able to deliver strikes downward, creating difficult angles for Ige to protect himself against.

The one advantage that Ige has over Kattar on paper is age. Ige’s youth could serve him well as he is much more adept at grappling and could use the extra step to work under the bigger competitor’s punches raining down from above.

Ige averages just under two takedowns per fifteen minutes of combat while Kattar averages less than one-fourth of that amount. 38% of Ige’s victories have come by submission as opposed to 10% by Kattar. The difference in fighting style should create for an interesting spectacle as both fighters have very different methodologies for getting the job done.

Although Kattar is better known for his striking prowess, Ige has a better percentage of landing significant blows. When Ige throws a strike, more often than not, it has the potential to damage his opponent rather than serving to set them up for a follow-up move.

Most of the top-rated sportsbooks feature Kattar as a favorite, but the smart money may be on Ige. A wager of $100 on Ige to defeat Kattar on Wednesday night will earn $250 if he wins.