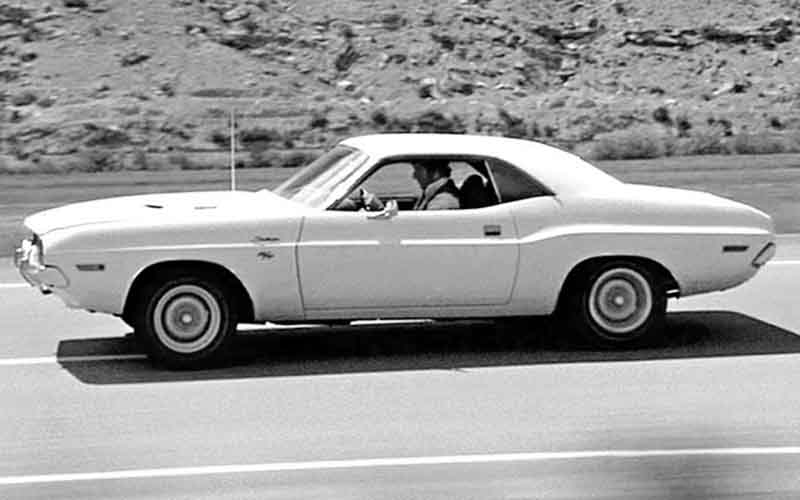 Vanishing Point is the story of Kowalski, a mysterious man with a sordid past who now finds himself on a cross-country mission where what’s at stake and why slowly become evident over the course of the film’s running time.

Released just two years following Easy Rider, Vanishing Point is one of many sparse hot-rod-based odysseys from that period attempting to reveal the current societal status by simply shooting and traveling through it at high speed.

What makes Vanishing Point different for the purposes of our analysis is the fact that the lead character, Kowalski, places a bet that’s mostly symbolic in nature, but is more than enough to jumpstart the narrative as well as his white Dodge Challenger.

What places Kowalski on his journey, and this film within our list of top sports betting movies, is a wager that he places with his good friend Jake who also happens to be his drug dealer.

Kowalski works as a car deliverer and is determined to make it from Denver, Colorado to San Francisco, California by Sunday at 3:00 PM. Only one problem – that only gives Kowalski roughly 40 hours to make the run.

Nowadays, that’s 19 hours on the road via Interstate 80, but in 1971, that meant two-lane blacktops for nearly the entire journey with a speed limit of 55 miles per hour.

What’s at stake? In the physical realm, the cost of the “bennies” that were fronted to Kowalski are the prize for making it to San Francisco in one piece. He uses the benzedrine pills so that he can make the entire drive without falling asleep.

Although Kowalski is using a stock car, this wouldn’t fall under the realm of NASCAR betting. The most likely category would be entertainment betting since the proposition merely requires Kowalski and the car to arrive by a particular time but doesn’t outline or restrict the parameters involved.

Spiritually, there’s much more at stake as Kowalski begins to attract nationwide attention. Once the police get on his trail, Super Soul, a popular disc jockey offers updates to his listeners as to the progress of Kowalski’s journey.

Super Soul’s unique style of rap seems to lend a cosmic navigational assist to Kowalski throughout the film until ultimately, the final steps of the journey must be made by him alone.

And there goes the Challenger, being chased by the blue, blue meanies on wheels. The vicious traffic squad cars are after our lone driver, the last American hero, the electric centaur, the, the demi-god, the super driver of the golden west! Two nasty Nazi cars are close behind the beautiful lone driver. The police numbers are gettin’ closer, closer, closer to our soul hero, in his soul mobile, yeah baby! They about to strike. They gonna get him. Smash him. Rape… the last beautiful free soul on this planet.

Aided by an oddball mix of hard rock, country, bluegrass, and gospel music on the soundtrack, Vanishing Point is an eclectic combination of all things 1971 scattered across the western United States that deserves to be seen.