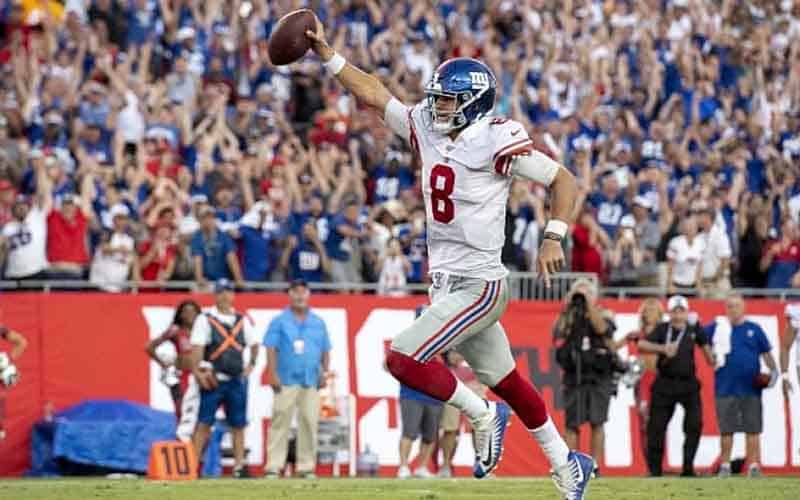 For years, the New York Giants have been the epitome of mediocrity in the NFL. Despite some bright spots, such as the emergence of Saquon Barkley as a premier back, the Giants have not been able to get over the hump.

But with just one game, the narrative has changed. The Giants finally have benched 15-year veteran quarterback Eli Manning for rookie QB Daniel Jones.

In his first game as a professional, Jones completed 63.9% of his passes, throwing 336 yards and two touchdowns in a comeback win over the Tampa Bay Buccaneers.

Even after starting the season 1-2, former Giants RB Tiki Barber believes that “it’s not impossible” for the Giants to make the playoffs under Jones. Barber goes as far as to call Jones a future Super Bowl-caliber quarterback.

Fans and former players are on the Jones Train, but so are sportsbooks. According to BetOnline, Jones is the favorite to win the NFL’s Offensive Rookie of the Year Award at +200 odds, or the equivalent of 33.33% chances.

Jones is not the only rookie quarterback tearing it up in the NFL. The first pick in the 2019 Draft, Kyler Murray, has +300 odds of winning the ROTY with Gardner Minshew’s +450 chances rounding out the top three slots.

Murray has thrown 830 yards in his first three games, including four touchdowns and a 61.3% pass completion rate for his 0-2-1 Arizona Cardinals.

Minshew, a sixth-round pick and backup to Nick Foles in Jacksonville, took over the starting role after Foles’s shoulder injury.

Through his first three games, Minshew has thrown five touchdowns and 692 yards on 73.9% passing. The Jaguars are currently 1-2 for the season.

The first non-quarterback on BetOnline’s list is Washington Redskins WR Terry McLaurin with +900 odds of winning Rookie of the Year. Although Washington is 0-3, McLaurin has 257 receiving yards and three touchdowns.

The full breakdown of the Rookie of the Year possibilities and their odds is below. To better understand these odds, along with other vital football information, check out our NFL betting guide.

2019 NFL Offensive Rookie of the Year