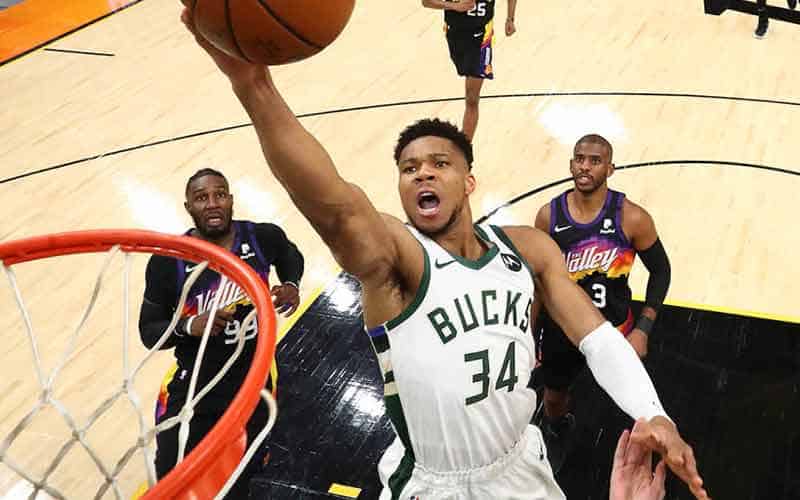 Just one calendar week ago, this writer was prepared to anoint the Phoenix Suns the 2021 NBA Champions after building a 2-0 lead over the Milwaukee Bucks.

Bucks star forward, Giannis Antetokounmpo, entered the series hampered by a hyperextended knee that threatened to end his season early. Giannis played through the pain and performed well, but the Bucks still dropped the first two games of the series and appeared to be well on their way to a second-place finish.

Milwaukee then went on to defy the NBA Playoff odds and reel off three straight games to take a 3-2 lead, and are now on the cusp of winning their second championship in team history tonight at 9:00 pm on ABC.

The point spread and the over/under are identical at the three main NBA sportsbook sites that we most often place basketball wagers with, however, there is some variance in the moneyline that allows online sports gamblers some wiggle room for shopping the odds.

For sports bettors that believe the Suns will pull the series to a 3-3 tie and force a Game 7, it would be wise to place your bets at BetOnline on the +171 moneyline that is offered up for Phoenix.

Online sports gamblers that want to lay some action on the Bucks to close out the NBA Finals tonight should opt for Bovada and the -190 moneyline that they’ve placed on Milwaukee’s chances.

Even though these three online sportsbooks are so closely aligned in their predictions, there is still plenty of room in the odds to line shop for the best payouts.

Although Milwaukee has surged back into a dominant position in the 2021 NBA Finals, the last two games have been competitive and close. Tonight’s game will be hosted by the Bucks in Fiserv Forum, but it would be unwise to count out the Phoenix Suns and their incredibly talented roster.

Suns’ veteran point guard Chris Paul appeared to be a man of destiny, poised for his first pro basketball title after a storied career that will place him as one of the game’s all-time best at the position and a sure-fire Hall-of-Famer.

Now that the Suns’ 2-game lead has dissolved, the pressure is on Paul and fingers are no longer pointing at Giannis Antetokounmpo of the Bucks, wondering when he’ll rise to the occasion and prove that he is a player that can carry his team to a championship.

If you are a new online bettor that is joining up with an online sportsbook for the first time, be sure to investigate the various sportsbook bonus offers that cater to NBA Finals fans that are looking to wager on Game 6 (and 7 if the Suns win tonight).