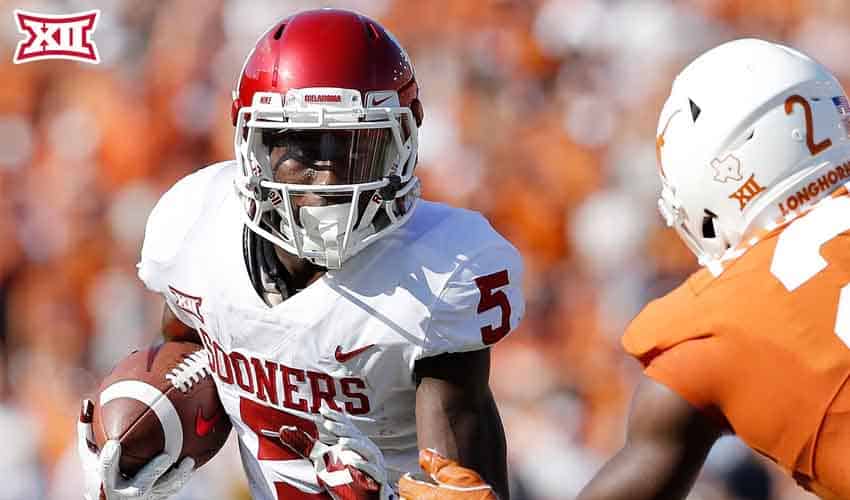 The Big 12 Conference was one of the most stacked in 2018. Seven of the conference’s ten teams finished over .500 with Texas and Oklahoma posting double-digit win seasons.

At 12-2, the OU Sooners won their fourth consecutive Big 12 championship in 2018. This season, oddsmakers at MyBookie give the team the best odds, -135, to win a fifth straight.

Former Alabama starting quarterback Jalen Hurts joined the Sooners as a graduate transfer this offseason. If things go their way, Hurts will be the third straight quarterback, behind Baker Mayfield and Kyler Murray, to transfer to the school, win the Heisman, and go number-one overall in the NFL Draft.

Oklahoma is expected to have a high-powered offense, but the defense needs a total rehaul after finishing last, #130 overall in pass defense in 2018. New defensive coordinator Alex Grinch won’t let that happen again.

“Believe me, if I could get [130th overall] tattooed on every single one of them, I would,” Grinch said.

Behind Oklahoma in the odds is the Texas Longhorns at +220. Based on the numbers right now, Texas is the only other team to have a real chance of winning the Big 12 championship.

Texas beat Oklahoma in October but lost their rematch in the Big 12 title game. But after finishing their season with a victory in the Sugar Bowl, going 10-4 overall, and securing another top-three recruiting class, the team is ready for 2019.

Ehlinger is optimistic about 2019 after the team’s success last year. “The difference from last year to this time is we believe in ourselves and we have the confidence to go out and win,” he said.

While the team has a bonafide leader on offense, the team has questions on defense. After leading the NCAA in non-offensive touchdowns in 2017, the team faltered in 2018.

Now, defensive coordinator Todd Orlando must replace nine starters from last season, including both cornerbacks and the entire front seven. Nevertheless, safeties Brandon Jones and Caden Sterns can add stability in the secondary.

While Texas closes the gap on Oklahoma, the rest of the conference falls farther behind. West Virginia and Iowa State share the third spot in odds at +1000. The teams both had eight wins last season, but could not match the power of Oklahoma and Texas.

The college football season begins August 24, but the first Big 12 matchup is not until September 21 between the Oklahoma State Cowboys and the Longhorns in Austin.

For a full comparison of each teams’ college football betting lines, a list is below.