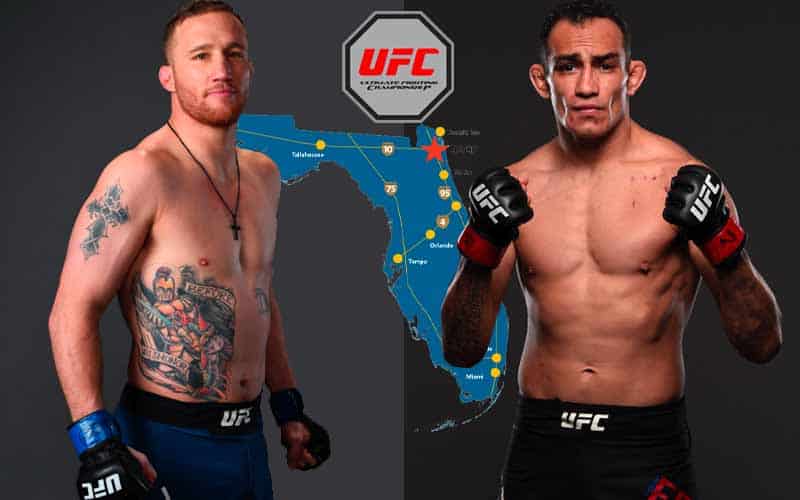 The Ultimate Fighting Championship is back in business after COVID-19 caused them to miss the last seven weeks of action. UFC 249 will be held in Jacksonville, Florida’s VyStar Veterans Memorial Arena this Saturday, with preliminary bouts beginning at 6:15 PM.

The event was initially scheduled to occur in mid-April at the Barclays Center in Brooklyn, New York, but the Coronavirus caused its cancellation. A second attempt was made to hold the event at the Tachi Palace Hotel & Casino in Lemoore, California, but stay at home orders caused those plans to cancel as well.

There’ll be plenty of COVID-19 testing kits to go around, as well as many other medical precautions, including a triage of medical experts on-site. Their last event in Brazil served as ground zero operations training and has them well-prepared as an organization for this precedent-setting, post-re-opening pay-per-view.

Despite the lack of attendance, legal sports betting outlets are experiencing a high volume of betting activity on UFC 249, and PPV sales are meeting or exceeding all expectations thus far.

Many top sportsbooks were expecting a lightweight title matchup that would see champion Khabib Nurmagomedov face off against top contender Tony Ferguson. Nurmagomedov had to withdraw from the fight when the new date for UFC 249 interfered with his observation of Ramadan.

In Nurmagomedov’s place enters Justin Gaethje and his 21-2 overall MMA competition record. ESPN is reporting that Gaethje will battle Ferguson inside the octagon with no fans in attendance. Furthermore, there will be no in-ring interviews after the fight, and production personnel will be minimal.

Browsing the variety of odds offered on Ferguson vs. Gaethje, the following assumptions can be made. Ferguson is expected to win the fight, and the fight is expected to end in the first round, but Tony is not favored to defeat Gaethje via submission or a knockout, or win in the first round. Something does not add up, because the only other way he could win within that time frame is a disqualification.

Regardless, bettors can use this information as a way to lay some action on different lines to hedge their bets. There is a hole in the oddsmakers logic somewhere, so find it, plug it, and make some cash! Keep up with the latest in legal sports betting online to track more events that are occurring as the country reopens.

Will the winner say “Corona” or “COVID” in post-fight?

Will the winner say “Khabib” in the post-fight octagon interview?

Fight to End in Round 1

Justin Gaethje to Win by Decision

Justin Gaethje to Win by Submission

Justin Gaethje to Win by TKO/KO

Justin Gaethje to Win in Round 1

Justin Gaethje to Win Inside Distance

Tony Ferguson to Win by Decision

Tony Ferguson to Win by Submission

Tony Ferguson to Win by TKO/KO

Tony Ferguson to Win in Round 1

Tony Ferguson to Win Inside Distance