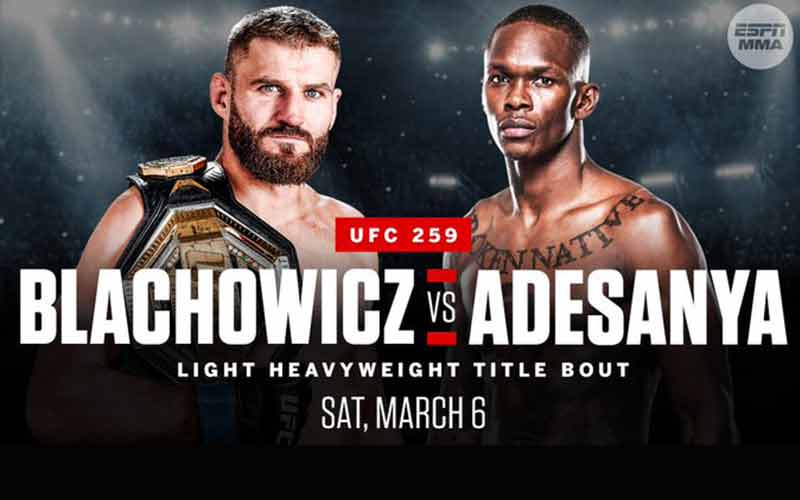 Tomorrow night, Israel Adesanya will put his unblemished record on the line when he moves up in weight class to face Jan Blachowicz at UFC 259.

The MMA pay-per-view event will take place at the UFC Apex Center in Las Vegas, and will begin at 8 pm tomorrow night. UFC 259 is available for a purchase price of $69.99 on ESPN+.

Naturally, the UFC betting odds favor the undefeated Adesanya, but are the online sportsbooks being too hasty in predicting victory for Israel when fighting someone that outweighs him by 20 pounds?

The money line on Jan Blachowicz is not attractive enough to pile on right now, but as the fight time draws nearer, watch for the odds to separate.

At the moment, a Blachowicz victory is paying out at $1.85 per each $1 wagered on him, and we expect online MMA betting sites to continue to take a majority of the action on Adesanya.

Although Adesanya is giving away the weight advantage to Blachowiza, he is expected to gain an edge by his height and reach and put Jan away by landing long-range bombs and scoring points with the judges.

The following UFC 259 MMA prop bets give gamblers two options for laying some action on how the fight will end tomorrow night. The top options from both lines suggest that Adesanya will win by a knockout, technical knockout, or disqualification, or, he will win by scoring the most points on the judge’s cards.

How Adesanya vs. Blachowicz Fight Will End

Conclusion Of Blachowicz vs. Adesanya

If you would rather simply bet on an Israel Adesanya victory, the money line odds will do the trick, but bettors will have to stake more than they will be able to claim.

A wager of $140 is required to earn a cash payout of $100 on Isreal Adesanaya’s money line UFC 259 odds. As we mentioned earlier, we expect these odds to separate even further by 8 pm tomorrow night, so if you intend on betting on Adesanya, do it now.

If Israel can defeat Blachowicz and prove that he can hang in a higher weight class, he plans to challenge Jon “Bones” Jones in the future. Adesanya intends to become the greatest MMA fighter of all time, and although those are lofty goals, he’s either achieve them or die trying.

If you can’t wait until tomorrow night to cash in, check out the UFC 4 simulation fight odds at our top online sportsbooks. Bettors can use the same research tactics as when they bet on real UFC fights, and the bouts occur at all hours of the day.