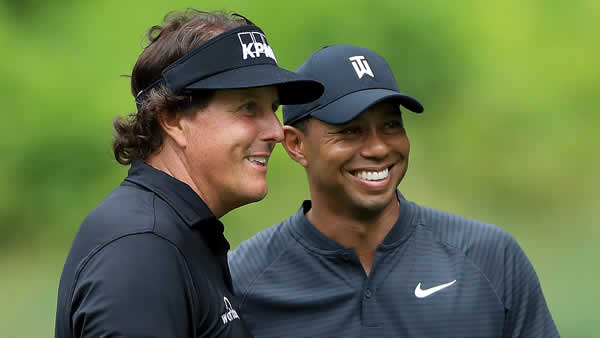 In golf, Tiger Woods and Phil Mickelson are household names. Thanksgiving weekend could pave the way for a not-so-new golf format to be reinvigorated.

The two golf legends are set for a winner-takes-all matchup at Shadow Creek in Las Vegas on November 23. It will be a Pay-Per-View event with the cost set to be announced later. According to reports, the plan is to replicate this formula with future one-on-one matches with top-ranked players facing off.

The winner of this tournament walks away with a $9 million prize.

Golf Digest is reporting that the two players are teaming up from a business standpoint to create these types of play scenarios at least twice a year. One match would be around the Fourth of July and the other would take place around Thanksgiving. Another possible option is two-man team events, which could see Woods and Mickelson partner up.

“The plans are for this one and possibly more, but you just never know,” said Woods. “When we first did the Showdown at Sherwood, it was basically only a one-time deal, but it ended up going more than that. So, we’ll see what happens with it this year.”

Turner Sports has secured the rights for the Pay-Per-Event. As of now, it is being titled “The Match,” but that could possibly change. Coverage will be provided through Turner’s B/R Live, DirecTV and AT&T U-Verse. HBO Sports and Bleacher Report are also set to assist with promotion.

Both are excited about the match and the looming possibilities that could arise pending its success.

“We’re both realizing that we can get a lot more done together than on our own. It’s been fun to work with him [Woods] on Presidents Cup and Ryder Cup as well as our match—and potentially other things,” said Mickelson.

While made-for-TV matches are not a novel concept, the prize level in this particular case establishes a new precedent. The number of bets, including props, on this match will also set a new benchmark for future one-on-one games.

There were discrepancies about the total payout from the PGA Tour, mainly because they saw this figure as overshadowing to their other tournaments. It was purported at one point that the players could put their own money into the pot, thus increasing the drama surrounding the event. Where the $9 million payout is coming from has not been confirmed as of yet.

Both players will be mic’d up during the performance, giving viewers insight into what goes down on the golf course.

“It’s an opportunity for us to bring golf to the masses in prime time during a period where we don’t have much going on in the world of golf,” said Mickelson.