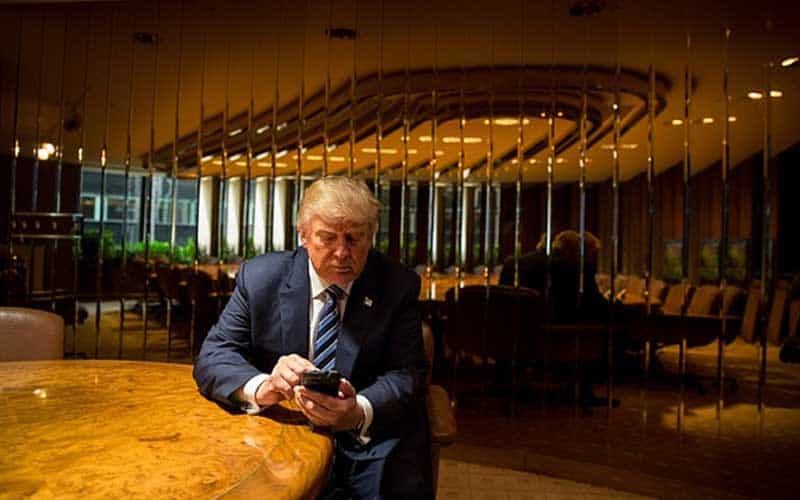 The more things change, the more they stay the same. In a way, the same could be said about foul language and its place in American media.

During a monologue in his 1972 stand-up special Class Clown, George Carlin provided listeners with the now-infamous “Seven Words You Can Never Say on Television.” The list was an instant hit and many of the words are still taboo in the United States.

Like the late Carlin, President Donald Trump has also been known to use similar dirty words to get his point across, whether that be in person or on Twitter.

As a result, Bovada is currently accepting action on if the President will use any of Carlin’s “Seven Words” on Twitter before January 1.

Warning: The following story contains strong language that should only be read by a mature audience. This is more of a heads-up than Carlin or Trump ever used, so count yourself lucky.

The “Seven Words,” also known as “Forbidden Words” or “Filthy Words” in some of Carlin’s later stand-ups, are a list of words that are normally censored on American television. Even today, over 40 years later, most of these words are still bleeped.

Per Carlin himself, the words are:

As some Twitter users may recall, Trump tweeted out “BULLSHIT” last month in regards to frustrations with Democrats. Even so, oddsmakers do not believe the President will use any of the “Seven Words” before the end of the year.

The Do Nothing Democrats should be focused on building up our Country, not wasting everyone’s time and energy on BULLSHIT, which is what they have been doing ever since I got overwhelmingly elected in 2016, 223-306. Get a better candidate this time, you’ll need it!

Bovada heavily favors any language usage by Trump to be outside Carlin’s list, giving him -950 odds of refraining until January 1, 2020.

Will Trump tweet any of George Carlin’s “Seven Dirty Words” before January 1, 2020?

At first, these odds feel like easy money. For a person like Trump, a politician that “speaks his mind” and has over 45,000 tweets, it seems like he is bound to use one of the “Seven” before January. However, once the words are broken down, the odds make more sense.

After the “grab her by the pussy” and “I’d be dating Ivanka if she weren’t my daughter” controversies, Trump’s team will remain vigilant on the President’s description of the female body. That knocks off two options immediately.

It is also likely Trump, or any other politician on Twitter, will never use “cocksucker,” given its negative homophobic and slut-shaming connotations. That’s three down.

Then when it comes to using “fuck” or “motherfucker,” Trump has only really used those in person. Even on Twitter, these words are still harsh to the ear. For examples of Trump dropping f-bombs, among other words, check the video below.

That only leaves “piss” and “shit” as words Trump is likely to use on Twitter before January 1. As the President has already used a variation of “shit” in the recent past, it is a solid candidate for a repeat.

However, the most likely “Forbidden Word” Trump could use would definitely be “piss.” In 2019, the word is much tamer than it was in the 1970s, especially compared to the other six words.

“Piss” also has many different uses Trump can utilize. “Democrats are pissing me off,” or “Don’t let the Far Left piss away our hard-earned salaries” are just two examples the President could tweet before the date cutoff.

This prop bet is not the only action Bovada is taking on political wagering. The site also features the odds for all candidates running in the 2020 Presidential Election. Trump is the current leader with +120 chances of reelection.