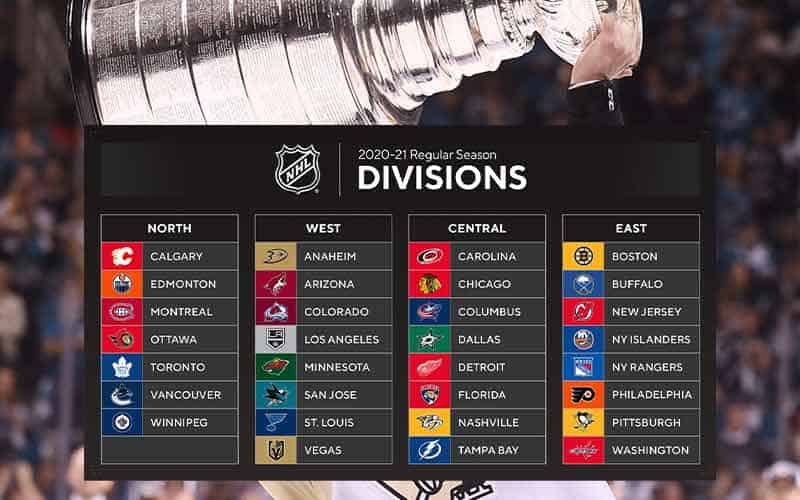 The 2021 NHL season now has six weeks in the books with operations running smoothly thanks to new divisional alignment that has allowed for teams to travel fewer miles and limit their exposure to COVID-19.

The league has re-organized the teams included in each of their four divisions in order to reduce the number of times that NHL franchises will have to cross the border between the USA and Canada to play games.

For that same purpose, the postseason bracket has also been altered, which will significantly impact the NHL Stanley Cup Playoff odds.

The NHL Playoff tournament had been a 16-team bracket that disregards divisional alignments. In 2021, each quadrant of the bracket will include the top four teams from each division and allow them to play a mini-tournament for the right to reach the Stanley Cup Semifinals.

Once the final four teams are decided, the brackets will be re-seeded to determine the home-ice advantage. The difference between the 2021 NHL Division setup to the prior season is illustrated below.

The web’s best NHL betting sites offer futures odds for Conference and Division winners, as well as the eventual Stanley Cup Champion, but in the past, the latter has been the best indicator of which team will win it all at the end of the year.

Due to this new format for postseason play, more emphasis should be given to the Divisional futures because they serve to more accurately predict the final four teams in the 2021 NHL Playoffs.

Stanley Cup futures odds are completely focused on each team’s potential to hoist the championship trophy after the final best-of-seven series of the season, and because of the new bracket, does not offer the complete picture that the Division odds provide.

The NHL Playoffs begin on May 8th, and if the finals last for seven games, then they will end no later than July 15th. The current futures odds suggest that the Toronto Maple Leafs will win the 2021 Stanley Cup, but before laying any action on them, be sure to investigate the odds for each NHL Division to ensure that their postseason path contains as few icebergs as possible.