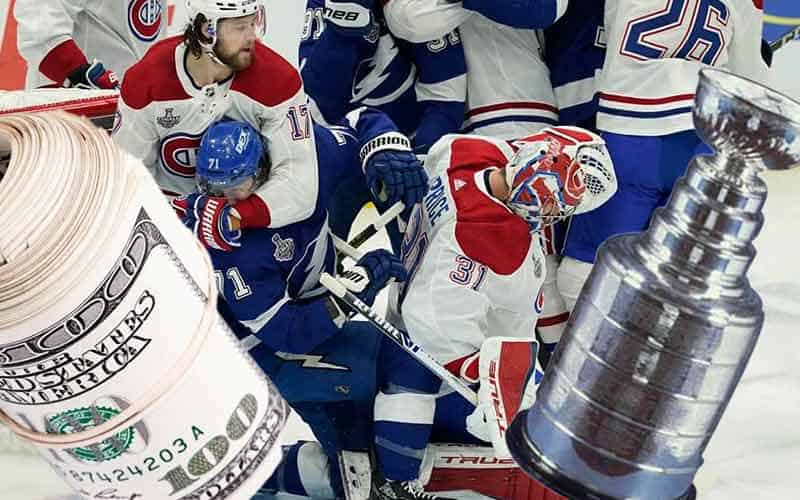 The Montreal Canadiens are no stranger to the NHL Stanley Cup Finals. The franchise has lifted the Stanley Cup in celebration at the end of 24 seasons, a mark that will be difficult to eclipse for any team in any sport.

The NHL Playoff picture odds throughout the 2021 season featured the Colorado Avalanche and the Las Vegas Golden Knights as the top two most likely teams to win it all.

The Tampa Bay Lightning have been near the top of the NHL futures odds for the entire season and are now three wins away from capturing their third Stanley Cup in team history.

The Lightning put together an offensive flurry in game one and blew out the Canadiens by a final score of 5-1. Game 2 of the Stanley Cup Finals is tomorrow night at 8:00 PM, and NHL Playoff betting sites are expecting Tampa to win by at least one goal.

The above NHL betting line suggests a final score of roughly 3-2, and if that occurs, the Tampa Bay Lightning could be well on their way to a 4-game sweep.

If Tampa can win the Cup this year, it will be the first time an NFL team has won back-to-back championships since the Pittsburgh Penguins did it in 2016 and 2017.

The following hockey prop bet offered by NHL betting sites suggests that the Stanley Cup Finals will last for at least five games, and unless the Canadiens win tomorrow night and begin to roll off four victories in a row, the outlook is grim for Montreal and their championship hopes.

No matter how many games pro hockey bettors believe that the NHL Finals will last, each option will payout at more than the amount risked.

If the Lightning can win 4 games in a row and sweep the Canadiens, bets on that occurrence will cash in at $3.25 for each $1 wagered.

Almost the same amount of money can be earned by betting on the series to go the distance ($2.90 for each $1 wagered), and the long odds suggest that the Finals will most likely end after 5 or 6 games.

Which direction the series goes depends largely on how the Canadiens perform tomorrow night on the road in Amelie Arena.

NHL bettors that have paid attention to the 2021 Stanley Cup Playoffs know that the Montreal Canadiens are a scrappy bunch, knocking off Toronto, Winnipeg, and Las Vegas along the way, all in six games or less.

After all, Tampa just completed a tough seven-game semifinals series with the New York Islanders, so perhaps some rust could begin to show by game 2.

Either way, don’t count Montreal out just yet – and take advantage of their underdog odds before the comeback begins.