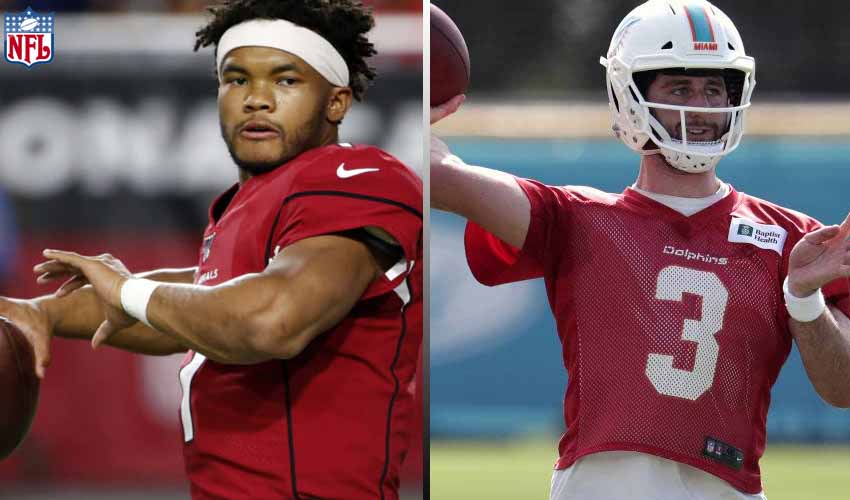 The 2019 NFL season is right around the corner, and when the games kick off on September 5, many rookies will get their first taste of real professional football.

Each rookie has their own unique experience during the first season in the league, needing to overcome a number of obstacles – whether it’s financial, mental, or statistical.

And while the potential superstars of tomorrow are beginning the road toward reaching milestones in their careers, MyBookie is accepting NFL prop bet action on what may happen in their inaugural NFL seasons.

First up: Which rookie quarterback will throw the first TD of the season? Arizona Cardinals QB Kyler Murray is the heavy favorite here at -300, compared to the next best odds of the Redskins’ Dwayne Haskins (+100).

Not only does Murray have the best odds to be the first rookie to throw a touchdown this season, he is also favored (-250) to have more wins than Miami Dolphins QB Josh Rosen (+200). Murray was chosen #1 overall by the Cardinals in 2019, replacing Rosen in Arizona. Now the 2018’s #10 pick isn’t expected to do well in Miami either.

If Rosen does not do well in Miami in 2019, there’s a chance that the Dolphins will select another quarterback in the 2020 draft. Right now, MyBookie gives both options -120 odds.

The most universal rookie prop bet available with MyBookie is which rookie will score the first touchdown in their careers. The three players with the best odds, David Montgomery of the Chicago Bears (+200), Josh Jacobs of the Oakland Raiders (+200), and Miles Sanders of the Philadelphia Eagles (+300) are all running backs.

Out of these three backs, only Jacobs is expected to be a Week 1 starter. The first non-RB on the list is Baltimore Ravens WR Marquise Brown with +500 odds to score the first touchdown. Brown is expected to be Baltimore’s #3 receiver.

Rookie running back with the most first-year touchdowns

Interestingly, DK Metcalf, receiver for the Seattle Seahawks, is projected to have the most touchdowns for WRs at +130 odds despite only have +800 odds to score the first TD amongst rookies. Brown has the second-best odds at +150.

Rookie wide receiver with the most first-year touchdowns

Although he has the second-best odds to throw the first TD as a rookie, Haskins has the best odds to start first in the league for the next prop bet. The New York Giants’ Daniel Jones is second with +250 odds and the Denver Broncos’ Drew Lock is last with +300 odds.

First quarterback to start a game

The team that passed on Haskins in the draft, the Giants, selected Jones at #6 overall. However, if things go awry for the rookie in the Big Apple, the team could pick another QB in 2020. Luckily for Jones, chances say that the team will not pick a QB in next year’s first round at -600 odds.

The last quarterback-specific prop bet focuses on Will Grier. The Carolina Panther rookie is expected to start under 0.5 games this season at -150 odds. But with Cam Newton coming off January shoulder surgery, Grier may get at least one start this season.

With all the love given to the offensive players, MyBookie has a couple props for defensive players. Green Bay Packers S Darnell Savage and Arizona Cardinals CB Byron Murphy have the best odds to tally the first interception by a rookie at +225 odds.

First rookie with an interception

Rookie with the first sack

One of the most interesting prop bets available pins Buffalo Bills QB Josh Allen against DE Allen. Oddsmakers project that it is more likely that DE Allen will have more than 9.5 sacks (-125) compared to QB Allen having under 9.5 interceptions (-115).

Finally, as emotions run high on the field or players find themselves in trouble during their off-time, a suspension is bound to happen. At +150 odds, Tennessee Titans DE Jeffery Simmons and Washington Redskins OLB Montez Sweat are the most likely to be the first rookies suspended.

Before they were teammates at Mississippi State, Sweat was kicked out of Michigan State and Simmons was suspended as a freshman for repeatedly punching a woman on video.

First rookie to get suspended

It’s usually a difficult task to determine a player’s future before they ever play a professional game in the NFL. With the amount of breakout stars and draft busts, even the favorable odds listed here could be flipped upside down before season’s end.