2019 Heisman Odds: It’s Tua Tagovailoa, Trevor Lawrence and then everybody else 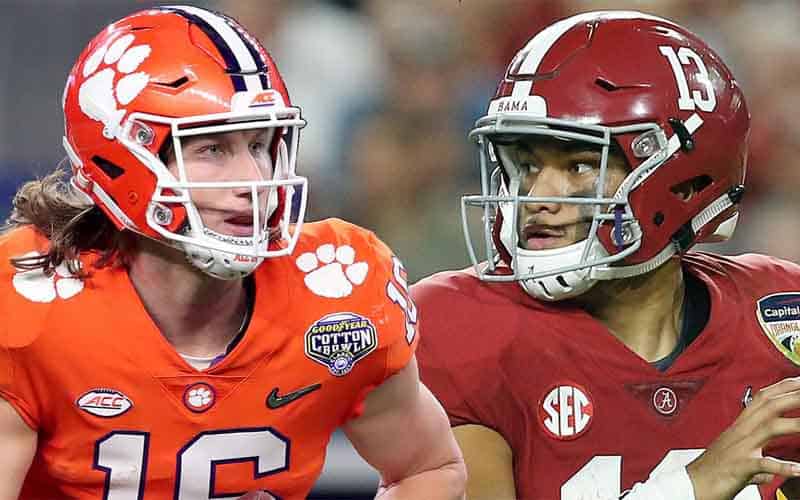 The dog days of summer are winding to a close and that has a serious implication for the followers of college football. The season is almost here, but it’s not just the games itself that will have the fans and bettors excited—it’s also Heisman season.

Arguably the most storied award in all of sports, the Heisman Trophy has become a source of great pride for fans and universities. The school wants it on full display in its trophy case and the fans like to claim the recipient as one of their own.

What started off last year as a Heisman runaway–Alabama’s Tua Tagovailoa dancing around the football field and slinging the football with artistic precision in ways that would most certainly yield him the Heisman–wound up slowly evolving into a two-man race.

Kyle Murray, a strong-armed dual-sport athlete playing quarterback for Oklahoma, played his way into the race and took it down to the regular-season finale–and that’s what decided it. Tua, the all-season odds-on favorite to win the trophy, was surpassed in the final game of the season and Murray, the season-long underdog, took the award back to Norman, Oklahoma.

And this year, there should be no disputing that the talent is there for this to be a great race to the end, as it was last year.

Tuscaloosa’s Throwin’ Samoan is currently atop the list. The Hawaiian southpaw was the runner-up last year, only after being a lock for the award up until the last week of the season.

In fact, his season ended somewhat like a tragic novel. He lost the Heisman and then got smoked in the National Title game. But his sidekick Jerry Jeudy, arguably the greatest receiver in the country, returns, and he should have a very talented offensive line blocking for him, something noted even by his head coach Nick Saban.

So with the depth of talent behind him and the motivation to rebound from last year’s late-season fallout, Tua seems like a good choice to be atop the Heisman roster right now.

Clemson’s golden-haired leader, to put it mildly, already has a resume that is in pretty good shape. He led his Tigers to a national championship in his first year. He is considered by many to be the next Peyton Manning.

He was the consensus no. 1 recruit in the country when he committed to Clemson. And when he was at the White House earlier this year, as if he needed any more accolades, President Trump even told him how handsome he was. He may look like a professional surfer, but don’t be deceived: he was born for the gridiron, and his odds could rise very quickly.

Fields, who transferred to Ohio State after attending Georgia for one season, is something of a mystery. He was a five-star recruit out of high school, an athletic dual-threat quarterback who was right behind Trevor Lawrence in the recruiting rankings, but he just hasn’t had much time on the field.

And with Urban Meyer retiring last season, Fields will be under a new head coach who is taking on his first gig as head coach of a major university. The promise is there for him to make a run and close the gap between him and the two proven quarterbacks, but he will have to show week-to-week consistency and live up to his high school hype.

Hurts rounds out the top four of the current candidates with serious name recognition. His days at Alabama were at times both glorious—the 2018 SEC Championship games, when he led his Tide to a second-half comeback victory, was his masterwork—and frustrating—he lost his job to Tagovailoa. He also has a bit of history as a heartbreaker, as he will always be beloved in Alabama because of his selfless reaction to being demoted.

Getting benched and then balling your team out of the SEC championship says something about one’s character. But now he’s moved on to a school known for its quarterback development—the Sooners have secured the last two Heisman trophies. He may be new to the Sooners’ system, but if the coaching staff can utilize his leadership and athleticism, OU could pull off the Heisman hat trick.

Here is a complete list of all the current contenders: