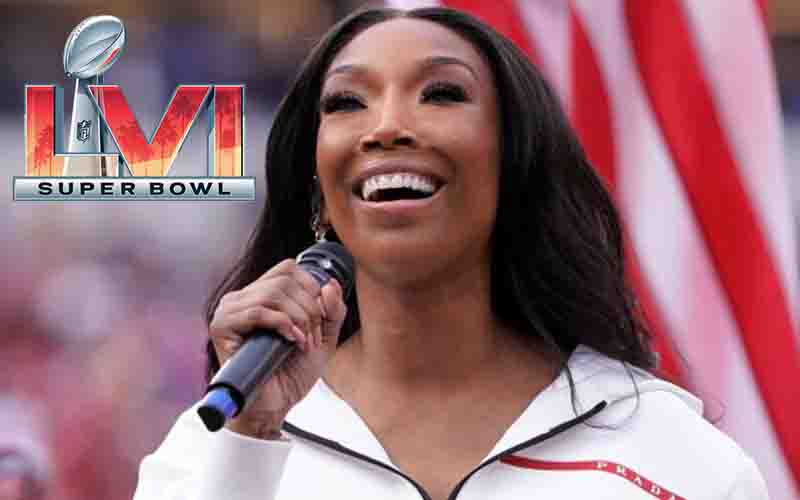 Could Brandy’s National Anthem performance prior to the NFC Championship Game on Sunday be the catalyst for Super Bowl prop bets for the length of the Star-Spangled Banner at SB LVI?

The game is 12 days away and the Super Bowl 56 National Anthem singer has not been announced, but the song is on the minds of many following Brandy’s rendition last Sunday that stirred up memories of Whitney Houston from SB 25 – what many consider to be the greatest performance of all time.

Should the NFL ask Brandy to perform it one more time at Super Bowl 56? Have a look at Brandy’s Anthem rendition from Sunday and you decide.

It is not unusual for NFL betting sites to flood the boards with Super Bowl props in the two weeks leading up to the big game. Fun Super Bowl props that have nothing to do with the two teams involved often appear well in advance of kickoff, including odds for the National Anthem.

What’s unusual about 2022 is that there has been no announcement made in regard to who will be singing the National Anthem at Super Bowl LVI, because they are usually revealed at some point in mid-January.

Gamblers must wade into the waters of the following Super Bowl 56 prop bet for the length of the Star-Spangled Banner performance without any insight into how curt or embellished it will be. Oddsmakers aren’t taking any chances either, as both the over and the under require more money risked than can be won.

Super Bowl coin toss prop bets do not require any prior announcements to be made and can take action all year round, but are also based on simple probability calculations and should be considered only for entertainment purposes.

As you can see by the by the following three Super Bowl betting lines featuring coin toss odds, all moneylines are listed in the negative and are granted the exact same chance of occurring regardless of which way the action is laid.

Of course, these Super Bowl prop bets expire before either the Cincinnati Bengals or the Los Angeles Rams take to the field of play. That is why we advise creating a Super Bowl bet schedule so that NFL gamblers can take advantage of a full game’s worth of wagering.

For instance, there are SB prop bets specific to each quarter, but there are also odds on which commercial will air first, halftime performance wagers, lines for the Super Bowl MVP, as well as action on the color of the drink poured on the winning head coach.

Check out our page dedicated to Super Bowl betting tips for more advice for a safe and secure wagering experience on the NFL’s championship Sunday.

Betting On The Tennessee Volunteers vs. The Georgia Bulldogs